A Possible Preview of Second Signpost Tactics: The Basij Prepares

The persian ram of Daniel 8:3-4 will charge out to the north, south, and seaward (west).  This is the Second Signpost as I wrote about in Hidden In Plain Sight.  I also wrote that it was the Basij with its hundreds of thousands of paramilitary troopers that would most likely be the boots on the ground running from country to country as the second beast of Daniel 7:5 which will consume much flesh (as it invades many nations).

The Basij would need to travel quickly from city to city and country to country causing chaos and Islamic revolution.  But I have wondered how they might go about it.  I ran across some websites that actually discuss the Basij conducting military exercises recently.  It has just completed a military exercise that I believe provides us a peek into how they will carry out what the Second Signpost says they will do.  The story was not generally reported in the media, but PBS reported that the Basij conducted a  military exercise, and a number of sites that watch Iranian military activities confirmed it and provided some details.

According to Iran Daily Brief, the exercise was called “Ela Beit al-Moghaddas.” In english, that’s “Towards Jerusalem.”  Interesting name, isn’t it?  I believe it speaks volumes, as it relates to the persian ram in Daniel 8:3-4 which is to run west, towards the Mediterranean, as well as north and south.  The spokesman, General Kazzemeini, said that this exercise was not to prepare for the elections next year, but to practice confronting foreign threats.  This author speculates that these “foreign threats” are the resistance that the Basij would find as it invades foreign soil during the Second Signpost.  General Kazzemeini said the exercise was to last three days from October 17-20.  He also said that 42 divisions and 150 battalions from various branches of the military would participate.

An Iranian propaganda site reports of a General Fazli speaking further about the operation.  The General said the operation took place in the region between Ahvaz, Basra and Khorramsahr.  The reader can refer to the map in this post to see the town and exercise locations.  The troops also had obstacles like the Karkheh River (which is also named the Ulai River, the same river that Daniel was sitting next to in Daniel 8:1) and Karoon River to cross.  The operation is said to have crossed rivers, fought in the desert, and in the swamps.  Apparently Basij and army forces were to advance over terrain and “attack” Khorramshahr which was set up as the town to “conquer.”  This site referred to Khorramshahr being liberated. 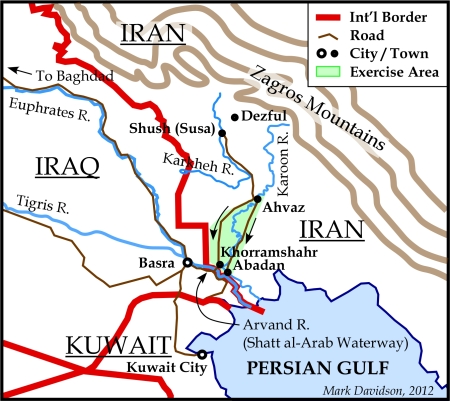 The location for this exercise is interesting also.  Though the exercise took place in perhaps eight places, the details I have found are in the area south of Shush.  On the map further north of the exercise area is the town of Shush.  Shush stands on the site of ancient Susa, which is the spot where Daniel saw the ram standing in his vision.  The whole region south of Shush is a perfect staging area for Iranian land offensive military forces since it is the only region of Iran on the same side of the Zagros Mountains as the territory that is to be conquered.

According to the PBS story, pictures of some of the city street fighting is shown here and here.  Video from Iranian news is here.  On that site, in the top video labelled “Phase 1” there is a parade and you can see all of the motorcycles used by the forces at times 0:05, 1:15, 1:45, and at 2:00 in the video.  Apparently motorcycles are a major form of transportation for the Basij.  If you google images of the Basij on the internet, motorcycles appear in many of the pictures.  Apparently motorcycles are quite common in Iran, as there are about eight million of them according to Wikipedia.

When the Second Signpost occurs and the ram runs out to the west, north and south, it may very well be done by motorcycle.  If one was to be standing by the side of a road at the start of the Second Signpost, a road that leads to Baghdad or Riyadh, I imagine it might look a bit like a scene out of Mad Max with hordes of motorcycles carrying Basiji two by two going by.  How appropriate that movie scene might seem since the Middle East may look at that time like it is going mad.

And after seeing Iranian president Ahmadinejad making statements and dropping hints as shown in past posts on this site, we get to see a possible preview of the tactics and boots on the ground carrying out the Second Signpost.

Like Loading...
‹ Announcing The Unsealing Of Daniel
How The Second Signpost Will Set The United States On The Path For The Tribulation ›