Home › Signpost #2: Iran › Zulfiqar, the Sword of the Second Horseman?

Zulfiqar, the Sword of the Second Horseman?

Then another horse came out, a fiery red one. Its rider was given power to take peace from the earth and to make men slay each other. To him was given a large sword. (Rev. 6:4, NIV)

I looked up, and there before me was a ram with two horns, standing beside the canal, and the horns were long. One of the horns was longer than the other but grew up later. (Dan. 8:3, NIV)

When the second horseman appears and rides out, it is the start of the Second Signpost.  The Second Signpost is the great invasion of the Middle East by Iran, the first half of the coming great Sunni-Shia War.  The bear of Daniel 7 will consume and the ram of Daniel 8 will charge, as both beasts are modern Iran, as I write about in my book Hidden In Plain Sight.

Not only am I continually amazed at how the events in the Middle East follow and support the interpretation of prophecy as given in my book, but the imagery from that region can sometimes stun as well.  Case in point is the first picture in this post.  I stumbled across it while working on the second edition of the book. 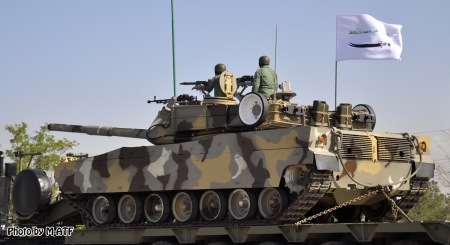 What you are looking at is a new Zulfiqar-3 tank which is homemade in Iran.  It was displayed at the military parade in Iran in April 2011.  Yes, the Iranians named their tank (as they do many things) after the most important sword in the Shia religion, which is also the imagery in Revelation 6, i.e. a sword.  Zulfiqar is the sword that supposedly belonged to Muhammad and was given to Shia’s first imam, Ali.  Could we say that perhaps the sword given to the second horseman might be something that looks like Zulfiqar? 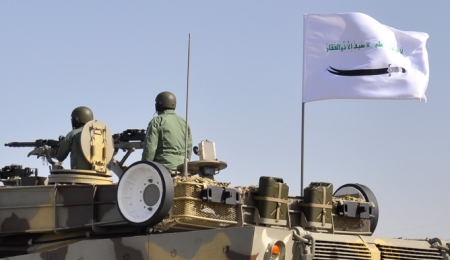 But look more closely in the second picture which zooms in on the flag.  On the flag is a drawing of Zulfiqar itself.  What do you notice that is peculiar about this sword?  It is a good size and is like a scimitar, that is, curved.  But look at the tip!  Yes, it is a bifurcated tip.  I don’t remember ever seeing a sword like that before.  And one tip is longer than the other!  What does that remind you of?  Perhaps the two horns of the ram where one is longer?  Even the men in the tank are situated where one is higher than the other.  I know imagery is not the same as hard events fulfilling solid Scripture, but this imagery, to me, is amazing.  It suggests that indeed the sword of the horseman is tailor made for Iran as the ram with two horns with one longer.

Any chills out there?

Like Loading...
‹ Second Edition of Hidden In Plain Sight is Ready
The Lesson of Signposts, Trends, and Details: Mursi Is Case In Point ›