Home › In The News › Turkish Government Approves Intervention in Syria

Which country will oppose and defeat IS? That’s what the media is asking. More pertinent though, per the Signposts is, which power will defeat and remove Assad from power?

An answer to both questions is Turkey, possibly.

One of our blog readers notified us of this developing story today – Turkey’s government has approved the deployment of its military into Syria and Iraq to stop IS. Here is the story from the BBC which reports on the various complications of such an action. 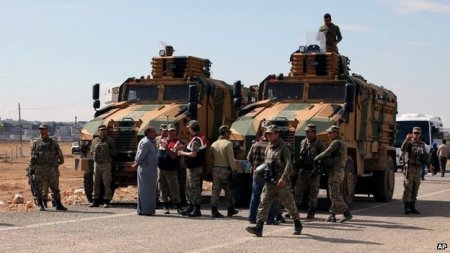 This of course opens up the possibility of Turkey installing a Sunni government in Syria as well. Toward the bottom of the BBC story we find it speaking of a statement by Turkish President Erdoğan,

“While he said ‘an effective struggle’ against IS would be a priority for Turkey, ‘the immediate removal of the administration in Damascus’ would also continue to be key.”

The U.S. may allow this too since it opposes the Assad regime as well. I had just written in my last post that Assad had to be removed and replaced if the Third Signpost is to play out the way the Bible seems to be telling us.

Daniel 7 and 8 tells us Iran will invade, but not how the invasion is triggered. Perhaps we have yet another development to watch – Turkey’s possible removal of Syrian President Assad from power forces Iran’s hand in invading. And here we would see a development for the Third Signpost directly triggering the Second.