The Basij Will Have Children Join in the Second Signpost

This post may be too dark for some.  Nevertheless it must be proclaimed.  The Signposts, after all is done, will likely be more ugly and horrific then we can imagine.

You remember the Basij, right? That’s the volunteer arm of the IRGC, from which the IRGC draws recruits into their ranks.

The Basij was responsible for the hundreds of thousands of Iranian teens being given a plastic key to heaven to wear around their necks as they sacrificed themselves, throwing themselves at minefields and at Iraqi gun positions. The Basij is also responsible for being the morality police, arresting people for wearing something too immodest of for men and women socializing inappropriately. 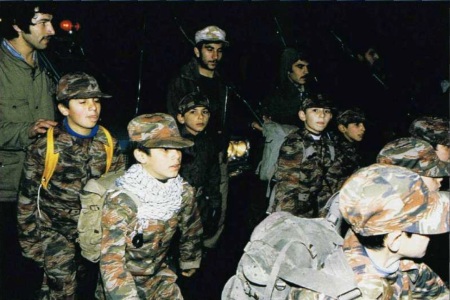 Children soldiers of the Basij sent to the front line during the Iran-Iraq War thirty years ago.

This disturbing news article caught my eye. Apparently the two generals (read, two of the kings of the ram, who rule the Basij) commanding the Basij have spoken up about the UN Resolution on the Rights of the Child.

BG Naghdi, king of the Basij showing his red badge, says joining the Resolution is “totally irrational.”  After all, where else will the regime get its children fighters?

The head commander, Brigadier General (BG) Naghdi has stated his opposition of Iran joining the resolution as it would close the student portion of the Basij, as it is “totally irrational.” So says one of the kings that it is totally irrational that the regime not send thousands upon thousands of Iranian teens to their deaths once the Second Signpost begins. 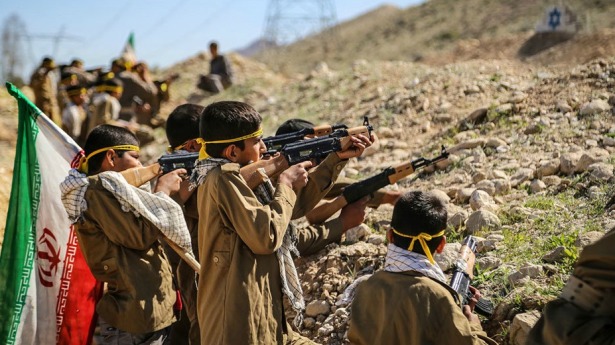 Children soldiers of the Basij in training. Note the cross of David as a target in the upper right corner.

We have been seeing clues as to the savagery of the Second Signpost, fulfilling Revelation 6:4 where men are allowed to butcher (the Greek word is not just “slay”) one another. Now we see that children will be joining the savagery. It’s not really a surprise, but here is confirmation of the kings’ intentions.

The top king of the Medes and Persians has a moment with one of his child fighters. Knowing what the regime is planning to do makes the smile on Khamenei’s face truly evil.

BG Fazli, the king second in command of the Basij, has requested parliament reject the resolution.

While searching the internet for recent developments I found another story of how the Basij will be running one fourth of all day care centers in Iran.  This of course will enable the Basij to maintain a pool of young brainwashed recruits.

Another news story has the lyrics of a song in a music video. It was translated into English courtesy the National Council of Resistance of Iran (NCRI – a group of Iranians trying to take their country back) –

“On my leader [Ayatollah Khamenei’s] orders I am ready to give my life.

The goal is not just to free Iraq and Syria;

My path is through the sacred shrine [in Syria], but my goal is to reach Jerusalem.

… I don’t regret parting from my country;

In this just path I am wearing my martyrdom shroud.”

These kids, brainwashed by the regime, are being taught to take part in the Second Signpost.

Here we see through these news stories, the regime is going to use the same tactics for the Second Signpost as they did during the Iran-Iraq War.  This is another of the many glimpses and clues we can see, of how horrific the Signposts will truly be.  Yet the full horror will not be seen until the world is plunged into Second Signpost.

Like Loading...
‹ The KINGS and Their RED BADGE of the SECOND SIGNPOST
The Signpost Perspective: Trump, America, and the Iranian Invasion ›