Home › In The News › Only Crushing a Protest, or Starting the Second Signpost?

Only Crushing a Protest, or Starting the Second Signpost?

A Michael S. Doran, a senior fellow at the conservative think tank the Hudson Institute, and Middle East watcher, has made a series of tweets, noting IRGC tanks and armored carriers crossing the border into Iraq.

Thanks go to a reader who brought this to my attention.

The Zarbatiya crossing is a point at the border between Iran and Iraq that is on a highway between Susa and Baghdad. In other words, these tanks would have gone WSW from Susa.

In two tweets, Doran went on: “Both Iraqi protesters and Muqtada al-Sadr’s people are expressing deep misgivings about the plan to appoint Mohammed Shia’ al-Sudani as Iraq’s prime minister. Apparently, it is Qassem Soleimani who stands behind the pressure to appoint al-Sudani — over the opposition of high-ranking Shiite elements (Sistani and Muqtada al-Sadr).” 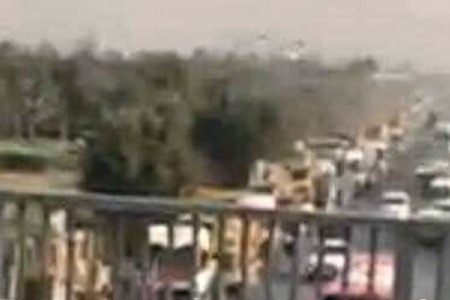 A column of supposed IRGC military hardware in the right land of the highway going to downtown Baghdad. (From @Doranimated)

In the final tweet Doran speculates what this is all about: “Connecting the dots, the nightmare scenario of the protesters is that Muqtada a-Sadr’s forces are in retreat, clearing the way for Iranian-backed military forces to storm the squares, crush the protests, and then crown Soleimani’s man as head of the Iraqi government.”

But the real nightmare is greater than Doran realizes.

What Seems to be Happening

If this series of tweets is accurate, there is a column of Iranian IRGC tanks and armored carriers headed to downtown Baghdad from the area of Susa, to crush the protests in Tahrir Square. The column is long if those photos are true. This was reported as happening yesterday.

More Staging for the Second Signpost?

Crushing the protest may seem bad enough, but is this another sign of the Second Signpost soon to come? The IRGC can now attack with drones anywhere it wants to cause panic and chaos, to allow more boots on the ground to move out.

The Persian ram would have to put boots on the ground in many countries to carry out the regime’s desired Revolution. This would involve the changing of governments in many countries in the Middle East to make them puppets of the Iranian Revolution. Are we witnessing this happening to Iraq right now?

If Soleimani and the IRGC are going to appoint their own leader over Iraq and use military force to end the protest, then this is a significant cross-over from the standing man-minded lion, to the bear that is going to feast.

From 2005 to now, Iraq’s prime minister was democratically elected, the process being part of the mind of the man. But with what is basically a coup by the IRGC, Iran could install a puppet.

If this is the case, we may be witnessing another prelude to the all-out Second Signpost. The most violent part of the Second Signpost, in my opinion, is where the IRGC will run out over Sunni-inhabited areas. Baghdad is right on the boundary inside Iraq between the Shia south and Sunni north. This whole action could be an overt act to ready southern Iraq as part of the launching area alongside Khuzestan.

Like Loading...
‹ We Likely Have a World Preview of the End Times: World War 2
One Thing Daniel Tells Us to Do ›