Home › In The News › Daniel 8:4’s “He Did As He Pleased” Becomes Rouhani’s Own Words

Daniel 8:4’s “He Did As He Pleased” Becomes Rouhani’s Own Words

“I watched the ram as he charged toward the west and the north and the south. No animal could stand against him, and none could rescue from his power. He did as he pleased and became great.”  Daniel 8:4 (NIV, author emphasis)

When Iran invades the Middle East to the west, north and south of Susa, it will do whatever it pleases, as Daniel 8:4 says.  No one will be able to stand against Iran, for a time.  This whole scenario is the Second Signpost as Scripture describes in Daniel 7:5, 8:3-4, and Revelation 6:3-4.

If no one will be able to stand against Iran during that time, wouldn’t that also apply to the time preceding it?  For Iran to get to the point where it is ready to invade, and ready to back the invasion with nuclear weapons enabling Iran’s leadership to hold the Gulf oilfields hostage so it gets to do what it wants to do, could we not say that during preparations Iran will get to do all it wants to do as well?

This thought hit me when reading this article on the IranTracker website, where Iranian President Rouhani was quoted following the negotiations that created the nuclear deal in Geneva.  Because the agreement does not verify that Iran ends its nuclear program nor sees to the removal of any nuclear weapons that are created, Rouhani said “In Geneva agreement world powers surrendered to Iranian nation’s will.” 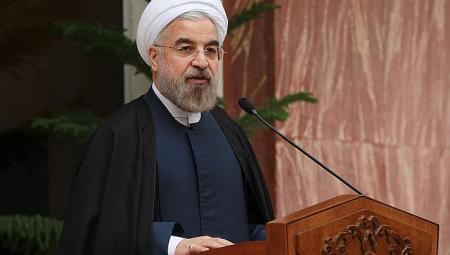 I believe Rouhani’s words are Biblically significant.  Daniel 8:3 says no one, and this presumably includes the world powers, can stand against what Iran wants to do during the invasion.  For all of the United States’, Europe’s, Russia’s and China’s nuclear arsenals that could turn the nation of Iran into a radioactive wasteland, none of it will get in the way of Iran.  Likewise in the time preceding the invasion when Iran makes preparations without being stopped, for what Iran intends to do, Rouhani speaks these significant words – “…world powers surrendered to Iranian nation’s will.”

Rouhani simply declared what is already true of the Persian ram: “he did as he pleased…”

(Note:  You can read about the nuclear deal with Iran here and here.  Essentially for the next six months Iran promises to not enrich any more uranium to 20%, in exchange for sanctions being lifted to a degree and allowing frozen bank assets overseas to be unfrozen.  Iran, though, has enough enriched uranium by now for several warheads.  Unfreezing of assets allows the IRGC-led Iranian banks to move cash around to better fund its various projects.)

Like Loading...
‹ The Second Signpost and The U.S. Petrodollar: Educate Yourself
Military Build-Up: Preparation for the Third Signpost ›