Well folks, it’s here!  Joining the ebook is the printed version, both softcover and hardcover.  So Daniel Revisited: Discovering the Four Mideast Signs Leading to the Antichrist is here.  The problems with the illustrations and the grayscales has been solved. 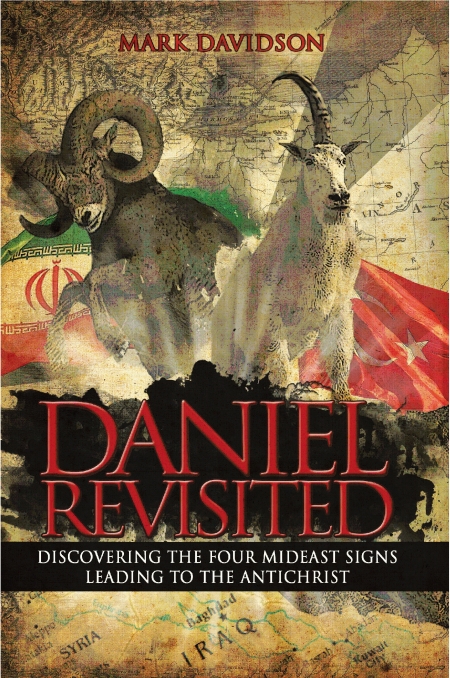 As I have told my readers on this blog, Daniel Revisited is a substantial second edition of my first book, Hidden In Plain Sight.  The message and the interpretation is still basically the same – what has changed is my own perception of reality – both in Iran today and in the Church’s treatment of the book of Daniel.  The following updates were made:

1) Much of Chapter 10, which is the chapter about Iran today and the Second Signpost, has been re-written or reorganized.  Much of the material is related to the posts here on this blog – how my own journey continued and I came to the realization that the second horn of the ram is not Ahmadinejad, but is the leadership of the IRGC.  For the sake of the readers of the first book, I will be posting here as I’ve said before, a couple sections of Chapter 10 that are completely re-done.  The new Chapter 10 shows an even more alarming situation then the old Chapter 10.

2) The Introduction has been re-written and includes a different theme.  The “hidden” theme has been replaced by a study that goes into the sealing and unsealing of Daniel, how Daniel was sealed, and why it was sealed until the end-times.  To that end…

3) …There is a new Appendix added which is a history of the commentary of Daniel 2:40.  Never thought a history of a commentary of a Bible verse was interesting?  The history of Daniel 2:40 has a few twists and turns.  There were presumptions made by theologians over these last eighteen centuries, and some misunderstandings along the way.  It all contributed to the sealing of Daniel right up to today.  What started as part of the Introduction, took on a life of its own and grew and so I had to spin it off into its own Appendix.

4) An update to the arguments in Chapter 5 of why fulfillment of Daniel 7 applies to today.

5) An update to Chapter 11 talking about recent events in Turkey.

6) An Index!  Yes, can you believe it?  An honest to goodness Index to allow readers to study single subjects across the book.

7) Overall the book has had a major combing over by a world-class editor.

8) And finally I must mention that the cover artist the Lord had me run into for the first book was available for this book and she really did an excellent job in my opinion.

If you have already read the first book, you already know the basic message of the Four Signposts.  I say this for the sake of those who may be starved for funds and think they may be buying a whole new book here.  However, if you want a more complete treatment of the Four Signposts, here it is.  And if you have never read the first book I encourage you to go ahead and get Daniel Revisited.