Critical Moment June 7 for Erdoğan and his Party

Though perhaps overshadowed by events involving ISIS and the triggering of the Second Signpost, our current candidate for the first horn of the goat and leader of the Third Signpost is coming up on a crucial moment in his career. 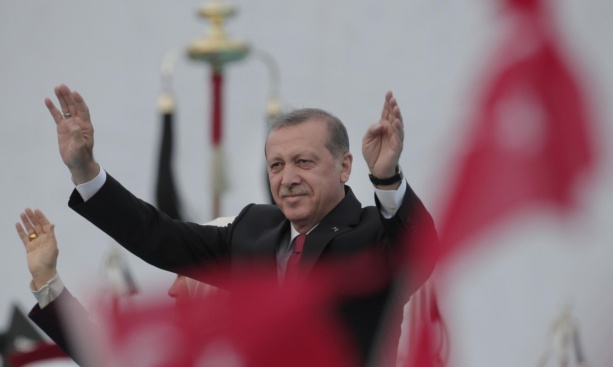 President Erdogan leads the celebration May 30th, of the 562nd anniversary of the Turks conquering Constantinople.  AP Photo.

This coming Sunday, June 7, will see the next election in Turkey. Will President Recep Erdoğan (pronounced Redchep Erdwan) and his Islamist AKP party increase its power in Turkey’s government? This story from the Guardian shows what might happen:

“When Turkey goes to the polls on Sunday, in what is shaping up to be an epic and fateful election, Erdoğan and his legacy will be the main, if not the only, issue on voters’ minds. ‘It’s what he calls the new Turkey,’ says Cengiz Çandar, a leading political analyst. ‘This is about his legacy and he’s very ambitious. He needs a strong presidency. He’s also very uneasy about corruption allegations and needs safeguards. Some fear it might be Turkey’s last election – before a dictatorship.’”

This story on the other hand emphasizes others’ hopes; that this election might see Erdoğan’s fall:

“But after winning three crushing victories in general elections in 2002, 2007 and 2011 there are signs support for the AKP is beginning to weaken as the economy slows and controversy grows over what critics see as Erdogan’s authoritarian tendencies.”

But I believe only one thing is for sure. There will be a leader coming out of Turkey who will be that first prominent horn of the goat, leading the charge in the Third Signpost. We do not know who it will be. If it is not to be Erdoğan we might see his fall in this election. But if it is to be Erdoğan, we might see his and his party’s advance such that they can indeed rewrite the constitution and see Erdoğan take great power in Turkey.  Watch and see.

Like Loading...
‹ Buying Gold and Silver: The Why and The How
The Second Signpost Is Not Yet…But It Is Getting Closer ›