A Ballpark End Date for the Third Signpost?

The Signpost message of Daniel Revisited shows us the signs of the end times leading up to the Tribulation. It tells us what nations are involved and what the major actions are. But of course it does not tell us dates. I believe that as long as we do not dwell on dates and try to predict the date of the coming of Christ, it doesn’t hurt to engage in some open speculation of the timing of the signs, as long as the signs themselves are the priority.

In this recent post I showed that Jesus’ words in Matthew 24 could be interpreted as the time from the start of the First Signpost until His physical return as occurring in one person’s lifetime. Recently I may have stumbled across another possible clock for the timing of the Third Signpost.

In this post and in Daniel Revisited I have written that the current Turkish president, Erdoğan, is an excellent candidate for the prominent horn on the goat. There really is no other politician alive today in Turkey that has the track record, popularity, and charisma to be the prominent horn, other than Erdoğan. 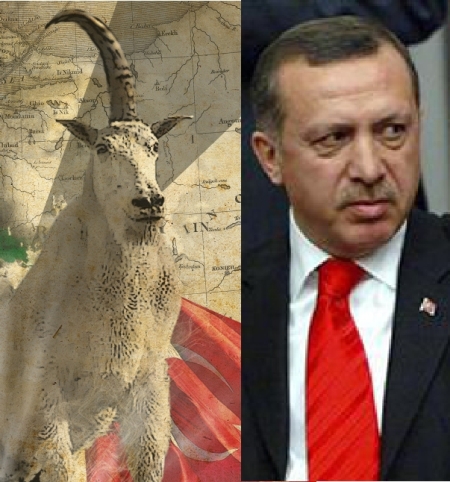 Turkish President Erdoğan: the best candidate so far as the goat’s first horn.

“The goat became very great, but at the height of his power his large horn was broken off, and in its place four prominent horns grew up toward the four winds of heaven.” (Daniel 8:8, NIV)

That is the end of the Third Signpost – when the one great united nation, the four-headed leopard, under the leadership of the goat’s first horn fractures in to four nations. The breaking off of the horn could be due to the death of the leader or his removal from power. The latest of either event is of course his death.

If Erdoğan is indeed to be the first horn of the goat, when could we expect his death to occur? In other words, when might be the latest the Third Signpost could go? Erdoğan was born on February 26, 1954, making him almost 62 years of age. This website shows the life expectancy for a male living in Turkey, at progressive ages. The table on the site shows that a 62-year-old man could expect to live to the age of about 78.7, since a 60-year-old would live to 78.4 and a 65-year-old would live to 79.8.

So, when Erdoğan has his 62nd birthday next month, he will likely live to 78.7, which is 16.7 years still in the future. Though we cannot know his final year (only God knows that), statistically, we can be fairly certain Erdoğan has 16 years remaining. And if Erdoğan is indeed the first horn of the goat, that puts a rough estimate on the latest end of the Third Signpost – sixteen years from now, i.e. 2032.

Keep in mind we do not know when the Second Signpost will begin, so both the Second and Third Signposts could only take sixteen years at most if they start this year. Also, if this seems far in the future keep in mind this would be an outside date – the horn’s end of power could be sooner. But this also shows that the Third Signpost could be an enduring one. We will see soon enough.

What I find also interesting is that here is yet another qualification for Erdoğan as the goat’s horn. Not only is he in a position as the most charismatic of Turkey’s politicians to fill the role of the goat’s horn, he also seems to be the right age to linger for a while to fulfill Daniel 8:8a: “The goat became very great,” which suggests some passing of time. Erdoğan is young enough to allow that to happen. The possible lengthiness of the Third Signpost is also consistent with the message of this post.

Like Loading...
‹ Thomas Nelson Edition Can Now Be Pre-Ordered
Echoes of Nazi Germany in the Future Sunni Confederacy? ›