Home › In The News › Oil for Rails, and Iran’s Preparations

Oil for Rails, and Iran’s Preparations

This news story appeared in the Iranian press the other day. Iran is looking to sell its oil in anything but US dollars. Iran and India have struck a deal where India will pay Iran in railroad track rails – 250,000 tons worth – for oil.

This earlier article states that SAIL – the Indian state-run Steel Authority of India Limited – will manufacture the rails.

This whole story about Iranian railroads got me thinking. I did some digging and found information on the Trans-Iranian railway. This is the rail link from Tehran, over the Zagros Mountains, to Susa of all places (the ram’s starting place, Daniel 8:2) and on to the Persian Gulf. There is a highway linking Tehran to Susa (today known as Shush), but I confess I wasn’t looking for a railroad. According to Wikipedia though the Danish company Kampsax installed rails that are only 75 lbs/yard which is the smallest and weakest used in the United States for things like Light Rail transportation. 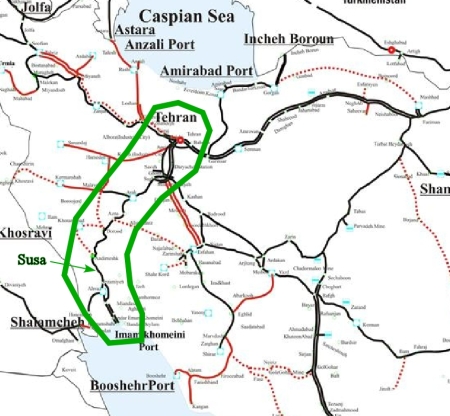 A railroad map with the Trans-Iranian railroad from Tehran to the Persian Gulf shown, with Susa’s location.  (From an Iranian website.)

The Iranian media story says Iran wants to spend $8 billion over the next six years to upgrade and expand its railways. The last sentence in that same story is interesting:

“…the country will need about 3 million tons of steel rails to connect all major cities, industrial centers and also ports for faster evacuation of goods.”

“Faster evacuation of goods”? I realize this is likely a Farsi to English translation but the way it is expressed is interesting.  Could this perhaps be due to Iran needing to move its tanks, motorbikes, artillery pieces, and other military materiel faster from Tehran to Susa? Could Iran be thinking of upgrading its railway to Susa? The railway from Tehran to Susa is about 930 km long. At 150 lb/yd, which is the heaviest duty rail, 150,000 tons of rails would about cover 930 km.

The single set of tracks of the Trans Iranian railroad, going through Arak, Iran. Arak is on the north side of the Zagros Mountains and halfway between Tehran and Susa. (From a Google Maps photo grab.  Note: The unevenness of the rails is a product of the photo grab.)

Iran may just be expanding its railways to other cities, but if expanding its railway to Susa is planned for the Second Signpost, then we are at least a year or two away from the start of the great Iranian invasion.  A heavy-duty railroad would certainly allow faster deployment of forces when the time comes.

My publisher has notified me that they are offering Daniel Revisited at $10.49 (30% off) for a limited time on their FaithGateway store at http://store.faithgateway.com/daniel-revisited.

Like Loading...
‹ Preparation: Why Western Governments Will Confiscate Cash and Not Gold
Status of the New Book as of May 2016 ›