Home › In The News › Russian Tu-22M Bombers Based in Iran

Russian Tu-22M Bombers Based in Iran

A few days ago Russian Tu-22M bombers began bombing runs out of an air base in Iran. The Tu-22M is roughly equivalent in performance to the USAF B-1 bomber. Since the bomber would fly from Iran instead of southern Russia each plane could deliver its full payload of 20,000 pounds of bombs. 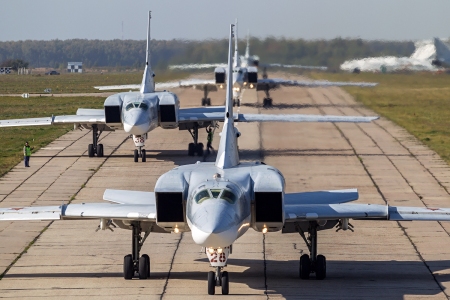 A few were deployed to Hamadan Air Base to attack Islamic State in eastern Syria. The air base is located about midway between Tehran and Kirkuk.

Su-34’s have also been sighted, which are roughly equivalent in range and payload to the USAF F-18.

What might all this mean for the Second Signpost?

For one, as one reader put it, it might make the shock of the Persian ram’s outward charges across the Mideast more shocking. Heavy bombers would definitely soften many targets that IRGC ground forces could secure. Going west to Syria is already being done today, but flying south into Saudi Arabia and north into Turkey would definitely set off a major war. However, Iran’s ground forces would be the main reason war would begin.

This brings up a question – when Iran runs out and invades the Mideast will other nations like Russia play a side role being allied to the main antagonist in the region that is Iran? If nations in the Mideast, like Egypt and Turkey, declare war on Iran, will they need to declare war on Russia as well? Will this deployment of Russian bombers to Iran be more common?

Watching the Mideast for developments is always interesting.

This is the first time in the history of the Islamic Republic that the regime has allowed a foreign military force onto its soil. That in itself is major. Stay tuned.