Home › In The News › The Signpost Perspective: The Kurds

The Signpost Perspective: The Kurds

Questions regarding the Kurdish people and the Signposts have come up from time to time. With the recent election for independence by the Kurds living in Iraq, this topic has come up again.

The Kurds are one of the largest people groups in the world without their own nation. They live in four nations – Iran, Iraq, Syria, and Turkey. About 30 million of them live in these four countries in a contiguous area (see map). 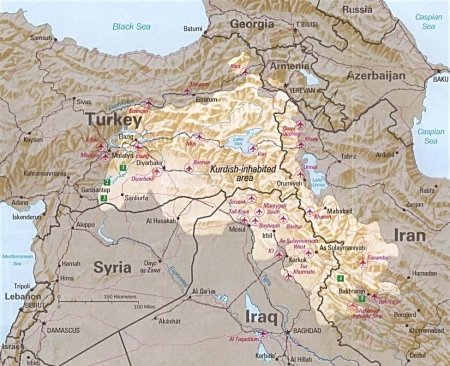 The region inhabited by the Kurds.

All four of these countries guard against, to varying degrees, their Kurdish minorities becoming independent for it would be a loss of territory and part of their citizenry.

The Kurds are considered by many sources to be an Iranian people, while some sources say they are specifically descended from the Medes. Others say they are from an amalgamation of peoples.

The Kurds and the Signposts

Whatever happens, whether one or all four groups in the four countries manage to become independent, whether by peace or by war, it will likely have no impact on the Four Signposts. Why do I say this?

First, from the point of view of the Signposts there are two groups of people in the Middle East:

(1) Those who belong to one of the seven nations represented by the seven heads of the four beasts in Daniel 7.

The seven end time nations are likely: Egypt, Syria, Iran, Iraq, Turkey, Albania, and the end-time Islamic realm. The seven must be descended from the seven nations that attacked and winnowed Israel.

(2) Everyone else, not part of the seven, on whom something will be done by the seven nations. This would include people like the Jordanians, the Druze, the Lebanese, Kuwaitis, Qataris, and yes, likely the Kurds.

Will the Kurds ever be one of the seven nations? Not likely. There is an inheritor of ancient Persia and that’s Iran. Iran includes the descendants of the Medes and Persians and that would also likely include the Kurds. The Kurds could also never replace the Turks of Turkey or the government of Iraq which is the government ruling Babylon.

It might be possible for the Kurds to take the place of Syria, but that would mean a sub-group of the Kurds must be descended from the Assyrians, as modern Syrians are. However, in the real world of geopolitics, Turkey stands ready to ally with Syria to form the Sunni Confederacy if Assad is ever deposed, but never with the Kurds. Therefore, Syria is much more likely to be one of the seven.

So in conclusion, the Kurds are a people unfortunately caught up in end time warfare between the seven nations, a victim like other peoples of the Middle East like the Jordanians and the Kuwaitis, of the Signposts, whether they are an independent nation or not.

Categories: In The News, The Signpost Perspective