Home › In The News › The Signpost Perspective: The US Embassy in Jerusalem

The Signpost Perspective: The US Embassy in Jerusalem

The United States moved its embassy from Tel-Aviv to Jerusalem on May 14, 2018.

Having some time to reflect on this event, and connect the dots to other events both past and future-prophesied, I believe this is an important milestone—not for the end times in general—but for Israel during these times.

I believe we can now divide the modern, end-time history of the nation of Israel into three phases.

The first phase saw the establishment of the Jewish people forming a community. After many centuries, the Jewish people returned to the land of Israel; not the land of Palestine, but the land of Israel. Jews began to arrive in the late 1800’s, bought desert parcels and swampland from their Arab neighbors, and created a thriving Jewish community. By 1948, there were a little over half a million Jews living and working in the coastal plain, the Negev, and Galilee.

The second phase saw the establishment of Israel as a fledgling sovereign nation. The territory of the new nation was expanded to unite the Jewish communities, but was still a sliver compared to the land God gave the Jewish people. The wars of 1948, 1967, 1973, 1982 and 2006 plus other various intifadas and battles, tested her resolve to exist, and exercised her military such that it can be thought of as the most effective fighting force in the entire world.

Though some nations recognized Israel’s right as a legitimate nation, the status of its capital city was in question by the world community. A capital city is that nation’s center and “soul” of its culture and who it is. Britain needs London to be Britain. France needs Paris to be France. China needs Beijing, and so on. Likewise, Israel needs Jerusalem as its capital city. That was denied to Israel until May 14, 2018. Though the Knesset, Prime Minister and other mechanisms of government existed in Jerusalem, the world didn’t see it. The world must be forced now to reckon with Jerusalem as the internationally-recognized capital of Israel.

The third phase will see Israel as a fully legitimate nation, with its capital city and a fuller fraction of its God-intended territory. Because of this truth displayed in the Middle East for all to see, the forces of Antichrist will come at her with all their fury.

I believe the Psalm 83 war will occur during the Second Signpost. Psalm 83 tells us Israel will win a great victory. Israel will greatly expand its territory during the Second Signpost to the point that it will contain Gaza, the West Bank, the land across the Jordan River, and southern Lebanon, all with Jerusalem as its capital. The Third Temple will be built prior to the Tribulation.

Israel will be an economically and militarily strong and territorially secure nation when the Antichrist and his armies of the Islamic realm invade—not Tel-Aviv—but Jerusalem. Israel, with its territory, its strength, and its capital city, will easily capture the attention of the Antichrist when the time comes, at the end of the Fourth Signpost.

I believe May 14, 2018 is the first day of Israel’s new third phase, which will continue until the return of her Messiah. The move of the US embassy to Jerusalem is the sign of the transition of Israel from phase 2 to phase 3.

Kudos to President Trump for the courage to stand against the world, and for keeping the promise, that many US presidents did not keep, to Israel to move the US embassy to Jerusalem. Just as the United States gave Israel legitimacy as a sovereign state, and the world had to begrudgingly face this with the US being the most powerful nation in the world in 1948, the US now again as the most powerful and influential nation in 2018 gives legitimacy to Jerusalem being the one and only capital city of Israel., and the world must now face this fact. 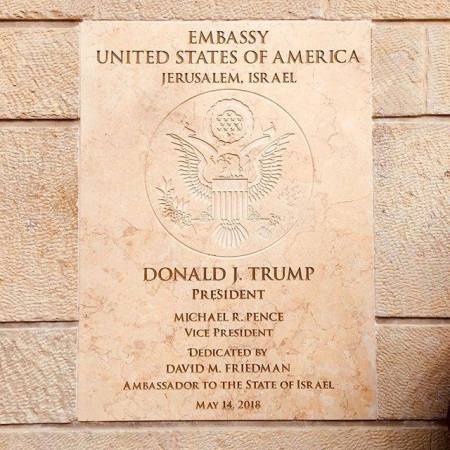 The sign near the entrance to the new US embassy in Jerusalem, with the words chiseled in stone, that under President Trump’s leadership the United States recognized on May 14, 2018 in actions and not only words, that Jerusalem is Israel’s only capital city.

My prayer for the United States is that just as it received and enjoyed its greatest power and influence after recognizing Israel in 1948, that in the end times to come, God will at least spare the US from the worst of these times of the Signposts because of what it officially recognized in 2018.

Categories: In The News, The Signpost Perspective