Home › In The News › The United Kingdom and the Signposts

The United Kingdom and the Signposts

Two developments in the news made me think of the role of the United Kingdom (UK) has played, and might play, in the Signposts.

First a British frigate, the HMS Montrose, attempted to intercept Iranian naval forces and prevent the British tanker from being stolen. The second news story reports the UK is attempting to assemble an all-European naval force to guard the Strait of Hormuz. 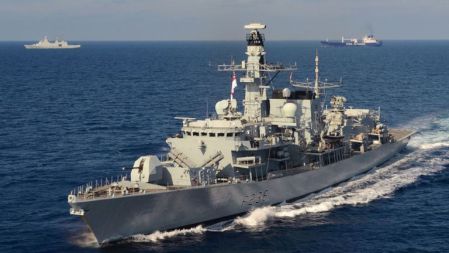 The UK frigate, the HMS Montrose is on patrol in the Persian Gulf, based out of Bahrain. It attempted to prevent the IRGC from seizing a British oil tanker.

UK and the First Signpost

The UK did participate in the First Signpost. Of the international force that invaded Iraq in 2003, removed Saddam Hussein, and made the lion stand and changed its mind (per Dan. 7:4), the UK provided just under 9% of the force. (The UK provided 45,000 troops of the total force of 514,000 troops from western nations.) So we may think of the USA as being in Bible prophecy as the force that made the lion stand, but the UK was part of that force also.

UK and the Second Signpost

We do not know at this stage, though, how UK military forces may be involved, or if they are involved at all. Just being militarily present in the region the UK increases the chances of being involved.

Categories: In The News, Signpost #1: Iraq, Signpost #2: Iran, UK in the End Times