Home › In The News › IRGC General Soleimani Assassinated: The Kings of the Medes and Persians Lose One of Theirs

IRGC General Soleimani Assassinated: The Kings of the Medes and Persians Lose One of Theirs

Yes, apparently it is true. General Qassem Soleimani, lead commander of the Quds Force of the IRGC, has been killed on Friday in a US rocket attack. 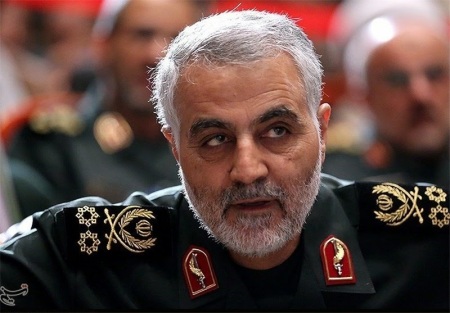 Major General Qassem Soleimani, top commander of the Quds Force, the international branch of the IRGC. He was one of the kings of Daniel 8:20. He was assassinated via US rocket attack on Friday.

At first I had wondered if it was only being reported by Israeli newspapers since they have reported his death at least twice before in cases of wishful thinking. But, no, the news came through AP, Reuters, and now Fox.

US President Trump did warn Iran after the attack on the US embassy in Baghdad, that the US would strike back. There was a report from Iraqi forces that three Katyusha rockets struck near the Baghdad airport on Friday. But it wasn’t an Iranian-led attack, but a US attack. This would mean the rockets were not Katyusha as they were made in America.

Several people were killed in the attack, among them General Soleimani. Also killed was the deputy commander Abu Mahdi al-Muhandis of the Iranian-backed Iraqi militias the Popular Mobilization Units (PMU).

This means that it can be recorded for the history record that US President Trump ordered the attack that took out Soleimani.

What impact this has on the region is hard to say. The IRGC is calling him a martyr, and martyrs can get an army more motivated.

Would this slow down or speed up the coming of the Second Signpost? It’s unknown at this point.

Regarding leadership within the IRGC, the supreme leader will promote the next king from the group of kings of the Medes and Persians to be in Soleimani’s place. We should see a replacement very soon.

You’ll see some news sources saying this attack risks the start of World War 3. This is simply not true since Iran is pushing to start World War 3 anyway. Others will say this is a game changer. Not really. The Second Signpost has been in the works for the last fifteen years, at least. It may seem this way to the world, but not to those watching the Signposts.

There is one question that arises pertaining to the end-time fulfillment of Daniel 11:2. Is it possible that Soleimani was the third king (with the two ayatollahs as the second and third), and the next commander of the Quds Force might be the fourth king. We will know after the Second Signpost begins.

(Thanks go to Chris Mantei of Wings of the Eagle Ministries and a couple other readers who jumped on this. Thanks to all readers who are watching with me!)