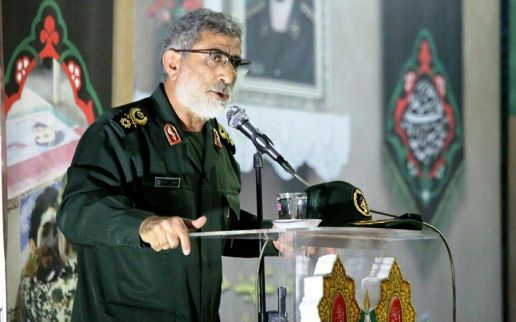 BG Esmail Ghaani with the required insignia of one of the kings of the Persian ram.

The state media IRNA published this statement from the supreme leader:

“In the Name of God, the Beneficent, the Merciful

Following the ascension of the Supreme Martyr, Major General Qasem Soleimani the great commander of the IRGC’s Quds Forces, the commandership of the Quds Forces of the Islamic Revolution Guards Corps to Brigadier General Esmail Ghaani, who has been one of the most prominent commanders in the Holy Defense and has served in the Quds Force with the martyr commander in the area for many years.

The force’s program “will be unchanged from the time of his predecessor.”

I would like to thank all of those colleagues for their presence and cooperation with Commander Qaani, and I wish them success, approval and divine guidance.

General Ghaani has served as deputy commander of the Quds Force since 1998. Soleimani served as his commander since 1999. The two, therefore, have served together for two decades.

About the same age as Soleimani, both men served in the IRGC from its beginning in 1979.

Interestingly, Ghaani’s first name is the Persian for our English name “Ishmael.” How appropriate that the political and religious realm founded by a man claiming descendancy from that same Ishmael (Gen. 16:11–12) whose hand was to be against all others, is also the source of the very first end-time assault—otherwise known as the Second Signpost—against the whole human race likely to be led by a man with the very same name.

Just as “Soleimani” was practically a household name among those watching the Signposts, so now “Ghaani” may become one as well.

Like Loading...
‹ IRGC General Soleimani Assassinated: The Kings of the Medes and Persians Lose One of Theirs
Red Flag over Mahdi’s Mosque: Second Horseman May Now Have His Great Sword! ›