Red Flag over Mahdi’s Mosque: Second Horseman May Now Have His Great Sword!

I never thought I would be writing an article like this, for I had never thought one single event could equate to the second horseman being made ready to make men slay one another.

There are reports from Twitter and, at this point, only British tabloids such as the Express, Metro, and Sun, that something unique has happened at the Jamkaran Mosque in Iran. That something is in response to the killing of General Soleimani.

Here is downloadable video showing the red flag of war being hoisted over the main dome of the Jamkaran Mosque (also on YouTube here):

Jamkaran Mosque, the Mosque of the Antichrist

The Jamkaran Mosque is located about 7 km (4.2 mi) south by southeast (SSE) of the center of Qom. It was built in AD 1003 by supposed order of the Mahdi himself, who is the twelfth imam of Shia Islam. The Twelver Shia Muslims of Iran are awaiting Mahdi’s appearance. 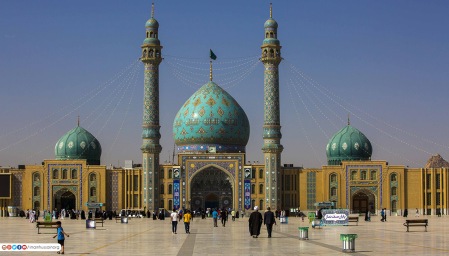 The Jamkaran Mosque, located 4 miles SSE of Qom. This is the mosque built for the Mahdi.

Former Iranian president Mahmoud Ahmadinejad had always talked about getting ready for the Mahdi, and had claimed he himself was in communication with Mahdi who is now in an “occultation,” i.e., is hidden. Who is “Al-Mahdi”? Those familiar with both mine (Daniel Revisited) and Joel Richardson’s writings (Antichrist, Mideast Beast) would know that is the Muslim name for our Antichrist (i.e. the Beast) of the Bible.

There is a water well that is claimed to be the place the spirit of Mahdi is located. It turns out that well is on the grounds of this mosque.

In this documentary about the Jamkaran Mosque on Youtube, a woman seated in front of the main dome says at about the 09:35 point, “Everybody who is here is here talking to Imam Mahdi Alayhi Salam hoping that one day he will come soon to deliver us from all the evil in this world.”

In other words, the people who are there are deceived thinking the Antichrist is their savior, and they are trying to communicate with the spirit of the coming Antichrist. It is in this place, at the main dome, that the red flag of war has just been hoisted.

Former president Ahmadinejad spoke of their Twelver beliefs that a major war was required to start chaos, and out of that chaos the Mahdi would emerge. Oddly, this is also what the Bible predicts, except the Mahdi is Antichrist.

What Could a Red Flag Mean?

The color red typically means war and blood. It’s the same color as the second horse of Revelation 6, which is the herald signaling the start of the Second Signpost, that of war.

Twelver Shias believe that war is necessary to bring about the Mahdi (/Antichrist). For the first time in the 1000-year history of the Jamkaran Mosque, the “mosque of the Antichrist” as I call it, the red flag was hoisted above the main dome. The words “Those who want to avenge the blood of Hussein” are on the flag. Hussein was the third imam of Shia Islam. He was killed unjustly in their view. Mahdi is to bring back justice, in their view. 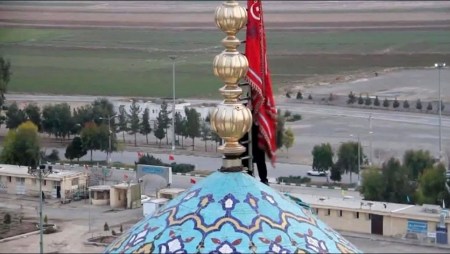 The red flag about to be hoisted over the main dome of the Jamkaran Mosque.

Since red flags are not raised above the mosque on a regular basis, but is a first time, I believe (and admittedly I could be wrong) that the Shia Muslim leadership is declaring now is the time for Mahdi to come and finally undo the great injustices, and for him to come so a great war will be started.

In the symbolism of the Second Signpost we have the Persian ram, the bear with three ribs, and the second horseman. We’ve seen the second horn of the ram grow for the last forty years (Ref. DR, chapter 10). The ram is ready. The Shia areas in the Middle East—west Syria, Lebanon, Yemen, and southern Iraq—along two of the three directions, i.e. two of the three ribs, are already calling on the bear as Daniel 7:5 says.

But what of the second horseman, riding the red horse, symbolic of war? He is to be given the great sword as he is given the power to allow men to slay one another on a vast scale, in one-quarter (Islamic quarter) of the earth.

I believe that this hoisting of the red flag over the “Antichrist mosque”, the first time ever, calling for avenging blood, is a rallying cry and a sign of resolve between the clerical horn of the ram and the military (IRGC) horn of the ram to begin the great war to bring about the Mahdi. That is the Second Signpost (see Daniel Revisited, chapter 10).

The red flag of war and avenging blood flying over the Mahdi’s mosque for the first time in history.

On top of this, there is another passage speaking of the Second Signpost and war. It is Jesus telling us in Matthew 24:6 about the war, to not be frightened, which in the original Greek language is, “do not scream in terror.”

To that end, the UK Express has as their headline for this story: “WATCH Terrifying moment Iran unveils red flag.” Not only do they use the word “terrifying,” where this flag hoisting by itself is not terrifying, but it echoes Jesus’ command, and even includes “WATCH” in all-caps, which are also Jesus’ words. I believe God is using circumstances here to show us the second horseman has just been handed his great sword. Watch the video again with this idea in mind. What might the Lord tell be telling you?

The IRGC is militarily ready to execute the Second Signpost. We saw this via the second horn of the ram growing longer, over time.

The resolve to start the Second Signpost is manifesting with the rallying cry and the raising of the banner for blood to be avenged and injustice (in their view) to end. The red flag symbolizes a great conflict to begin, to avenge the blood that was shed—to the Twelver Shia—unjustly. The killing of Soleimani was the event to kick start all this. The militant Shias of Iran are now on the warpath.

That banner is the red flag being hoisted over the Jamkaran Mosque for the first time ever. The Second Signpost may now be very soon, and the second horseman is for the one and only time being handed his great sword. The horsemen kick off each Signpost. The sword is conditional for the second horseman’s work to begin.

Remember, too, the Second Signpost may include a major attack of some sort on the United States by Iran’s allies Russia and China. Therefore, this website may not be available. You, dear readers and fellow watchers, must be the knowledgeable person shedding light in your family, church and community as to what is actually happening, that Iran’s running out over the Middle East is the sure sign, the next sign, In God’s plan for the return of the real Savior that is Jesus Christ.

So be prepared. Be on the alert. As Jesus said, “Watch”!

Categories: ALERT, In The News, Signpost #2: Iran, The Signpost Perspective