A Reminder of the Lion Standing Per Daniel 7

While we wait and watch for the remaining Signposts as written about in Hidden In Plain Sight, and strain toward Christ’s coming, once in a while we are reminded of where we’ve been.  Such a moment came while I was checking out the news on the Al-Monitor website a couple days ago. In one of its stories, Iraq, Kuwait Chart a New Path, representatives of Kuwait were signing an agreement with representatives of Iraq, next to each other, in a completely civilized manner, as you can see in the photo (from Reuters / Karim Kadim).  Kuwaitis are on the left, Iraqis are on the right. 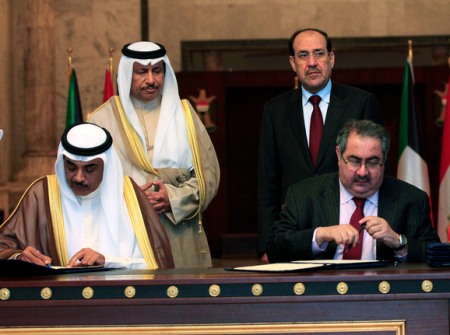 The agreement ended a border dispute between the two countries.  Isn’t this the essence of what the First Signpost has accomplished?  That Signpost began with a ruler who made Iraq behave like a lion with wings as Daniel 7 portrays it.  It used to devour its neighbors such as Kuwait and the Khuzestan province of Iran.  You would have never seen Iraq sitting down at a table like this with its prey.

But the First Signpost has left behind an Iraq that is forced to stand like a man, and think like a man, in a civilized manner, i.e. Iraq was democratized.  The lion that is Iraq is now civilized – you can see them being friendly and civil, using things like pens and paper to sign agreements, in order to get along better with other nations.

Reminding us though of the over-arching theme of the end times in which these Signposts are unfolding are the colors of the flags in the background – the colors of the horses of the four horsemen.  We are done with the white and moving on to the red, where the Second Signpost promises to be a lot less civil.  And when that is done, the horrors of the black and the green await us in the not too distant future.

Like Loading...
‹ The Signpost Perspective: The Coming Black Swan Event
ALERT: A Change in What Is Imminent, A Change for the Worse ›

Categories: In The News, Signpost #1: Iraq