Home › In The News › Is ISIS the Trigger for the Second Signpost?

Is ISIS the Trigger for the Second Signpost?

If you are a regular visitor to this website, or to Joel’s, you are well aware of developments in Iraq these days. The situation looks like ISIS (the Islamic State of Iraq and al-Sham, which is the Levant) might provoke the start of the Second Signpost. And I’ve been getting many emails, texts and phone calls. The theme is a basic query: “wow, could this be it?” The short answer is yes, it could. The longer more correct answer is contained in the rest of this article.

I have been watching for the start of the Second Signpost for over ten years now. When God chose to allow the scales to fall from my eyes in 2003, as I wrote about in my first book, I was watching the First Signpost unfold right before my eyes while feeling a chill. I feared for our troops in Iraq because I believed that at any time Iran could start the Second Signpost. But as I studied the situation in Iran I came to the realization that the Supreme Leader and the IRGC were not ignorant amateurs. They were patiently getting ready. It might take years. I continued to follow Christ, live my life, raise a family, but as a hobby kept an eye out for events in Iran.

When Ahmadinejad came along in 2005 with his rhetoric of making the path ready for the Mahdi, I realized the Iranian government had elements bent on making the Second Signpost happen and so I finished my research and published my first book in late 2010. But as I continued to study Iran’s government, IRGC, economy and military I realized the taller and longer horn of the ram that grew up later wasn’t going to be Ahmadinejad, but the perfect fit to fulfill prophecy was the IRGC. So I made a second edition and published Daniel Revisited.

And then came the nuclear issue with the most recent round of talks this past year. The west has basically given carte blanche to allow Iran to finish its nuclear arsenal to fulfill Daniel 8:4, where the ram did as he pleased. A nuclear power is not interfered with as easily as a non-nuclear one.

So with a military led by the IRGC reaching maturity, backed by up to half of the economy of Iran, and the ideology to drive it, all that was missing was an opportunity to start the war.

Since the start of the Syrian civil war it dawned on me that the opportunity would come with the rising tide of the Sunni-Shia conflict. The conflict has been heating up in recent years with the Assad regime and Iran on the Shia side and the militant rebels in Syria being the Sunnis. And then the Sunni insurgency spilled into Iraq. I wrote a post back in January 2014 about Al-Qaeda (ISIS was part of Al-Qaeda at the time) taking over the Iraqi city of Fallujah and the Anbar province. In that post I suggested that such a development could provoke Iran to start the Second Signpost.

For those who are unfamiliar with the Signpost timeline as laid out in my book, Daniel Revisited, the next major event in Biblical prophecy is the Second Signpost, the invasion by Iran of much of the Middle East. The Third Signpost would then be the four-nation Sunni confederacy led by Turkey to fight back and retake the territory taken by Iran. These two Signposts, if true, together would make up a huge and world-impacting Sunni-Shia War where Iran starts or escalates it and Turkey and Egypt finish it. This war would be world impacting because the second horseman of Revelation 6 which brings forth the Second Signpost, is given power to take peace of mind and stability away from the entire earth. This will be due to the oil. And of course the third horseman with the Third Signpost brings famine.

Lending weight to the idea that this Sunni-Shia War will be religious and taken personally by many, is in Daniel 8:6-7 where it says the goat (that’s the leader of the children of Yavan – those living in Turkey and elsewhere) will attack the ram of Iran in a great rage and do so furiously. The word used for “rage” in the English is mara, which means bitter. This is the same word used for Esau’s bitter hatred towards his brother Jacob. It will be very personal.

Anyway, getting back to the events at hand, news stories back in January were talking about how Sunni rebels fighting in Syria, losing ground against an Iranian-backed Assad, just decided to invade Iraq. I believe it is more calculated than that. In order to win against Assad, they need to cut off aid from Iran. And perhaps to do that, subduing a weak Iraq might be the ticket. But in addition to simply cutting off aid from Iran, ISIS (which cut ties with Al-Qaida in February 2014) is trying to establish a new Islamic nation and caliphate.

Iran had a supply line uninterrupted through Iraq (which Iran basically controlled) and Syria to Lebanon. In fact recently (about six weeks ago) a former Iran IRGC commander boasted that Iran had an uninterrupted access to Israel’s border. So how does Iran view events in Iraq now?  The map shows the situation with Iran’s access to Syria being mostly blocked. 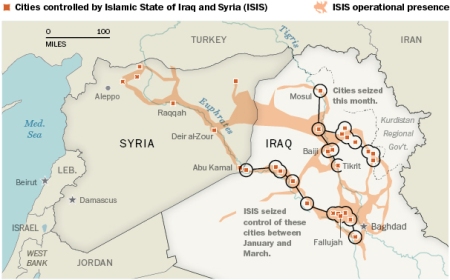 Iranian President Rouhani declared that Iran is ready to fight ISIS. This is of course the stance they would take for it is loaded with opportunity. Another Iranian official blames Saudi Arabia and Qatar for supporting ISIS financially, which strengthens Iran’s claim for invasion of those countries as well. Overall, Iran seems very willing to get involved in this war in Iraq.

So what might happen from here? Let us keep some things in mind. First, in Daniel 7 the First Signpost was the lion being forced to stand and its mind replaced. This was fulfilled by the democratization of Iraq as I show in detail in Chapter 9 of Daniel Revisited. The next Signpost involves the Iranian bear being told to go out and eat much flesh to gorge on many beasts. There is nothing said in Daniel 7 about the lion being taken down. I realize this may be reading too much into a passage of prophecy but those are the major events at the start of Daniel 7 – the democratization of Iraq and then an invasion by Iran. If ISIS conquered Baghdad which is the head of the lion with its mind of a man, the lion would be taken down.

I don’t think Iran will invade until it is ready – nuclear weapons and all. But ISIS may be forcing its hand. Iran already intends to invade; to bring chaos to the Islamic realm. ISIS may very well provide a great excuse but it may do so sooner than Iran is ready.

So I am leaning towards a certain scenario. I thought I was going out on a limb on this one but thankfully, I found an opinion at the Institute for the Study of War (ISW), a Washington D.C. think tank that has an opinion that fits with the scenario I have in mind. I could very well be wrong, but here is my opinion nonetheless. Indications show that Iran is creating its nuclear weaponry right now. It may already have them, but for whatever reason they are not quite ready to invade. If ISIS were to conquer Baghdad, that would be it for the new democratic government in Iraq, and Iran’s network of supply to the west would go completely down. In order to buy time until it is ready, I believe Iran will send fighters to fight alongside Iraqi soldiers to defend Baghdad. They won’t be Iranian soldiers in uniform most likely – that would be rather shocking for many western nations – but they will be militants aligned with Iran. Sometime during this struggle for Baghdad, Iran may very well begin the Second Signpost and completely obliterate ISIS.

To quote the ISW,

“Iraq’s security forces will not be able to retake all of the ground they have lost. They may not even be able to hold what they still have. The best-case scenario is a stalemate in which Iraqis manage to contain the ISIS state and army for now. The more likely case is the creation of another Syrian-style conflict pitting ISIS with increasing international support against desperate and increasingly brutal Iraqi Shi’a militias and ISF elements. The two civil wars, which have now completely merged, will continue to expand, destabilizing an already unstable Middle East and inviting further intervention by the Sunni Arab states and Iran. In the very worst case, the fall of Mosul could be a step down the path to outright regional war. It is likely to result in the meaningful creation of an al-Qaeda state straddling the Iraq-Syria border (and erasing that border), giving al-Qaeda a secure base of operations such as it has not had since the fall of the Taliban.”              – Jessica Lewis, Jun 11, 2014, The Islamic State of Iraq and al-Sham Captures Mosul and Advances toward Baghdad (emphasis mine)

I have been more convinced over the past year or so that the Second Signpost would start perhaps in only another year. It could be next week – it could be next year, but it is very close now. The statement made above by the ISW confirms my suspicions. Shia militant elements, both Iraqi and Iranian will hold off ISIS for as long as they can at Baghdad. This will buy time for Iran to finish its preparations. Sometime during or shortly after the battle for Baghdad, the Persian ram will charge and the bear will begin to gorge. ISIS will be its first casualty as the Second Signpost unfolds.

Will it play out this way? I don’t know. This is only my best guess. But the Second Signpost is close. I was praying that it would not take us by surprise; that it wouldn’t start with an Iranian nuclear test and an announcement from the supreme leader that the oil fields are now theirs, with gasoline tripling in price overnight. It looks like my prayer has been answered. At least when it starts in earnest it won’t be a surprise. We will know that it was coming ever since ISIS marched on Baghdad. For now the opportunity for Iran to invade has been added to the will and the capability.

We don’t have long to prepare. Seek the Lord in a relationship with Him right now if you haven’t already.  That is what will ultimately allow you to overcome the world – whatever happens.  I also ask you all who read this to visit www.thegospelintheendtimes.com, where you can read more about preparing for the end times.