Home › In The News › In the News: Erdoğan’s Image Seems to be Growing

In the News: Erdoğan’s Image Seems to be Growing

“So is there anyone in the political scene in Turkey today who might be the first horn of the goat? After all, if the invasion by Iran starts within the next few years, the Confederacy counterattacking with its leader as the single horn of the goat could be seen in just five to ten years from now, more or less. Any leader who is the horn would have to be influential, popular, have a track record for getting things done, and be an Islamist. This doesn’t leave much time for political newcomers. That man may very well be in power now and, if this is so, it can only be Turkey’s current prime minister Recep Tayyip Erdoğan (pronounced red-chep ta-jip aerdo-an). He indeed seems to be someone who is the one leader in a hundred who stands out.”                          p. 211, Daniel Revisited

Well it seems Prime Minister Erdoğan is indeed standing out these days. The Turkish presidential election is coming up this Sunday, August 10th. Prime Minister Erdoğan is the leading candidate of the three according to Turkish polls. Earlier corruption scandals and his handling of the Gezi Park demonstration do not seem to have permanently nor adversely affected his political career.  I recently wrote about Erdoğan here.

Two stories appeared on the Al-Monitor website recently. The first talks about the “Cult of Erdoğan.” The story includes this rather strange incident:

“As Erdogan addressed the crowd from the platform, a woman was seen fainting. Erdogan gesticulated as if saying “bring her over.” Instead of being taken away by ambulance, the allegedly sick woman was taken to Erdogan. The stretcher was elevated to the platform and Erdogan reached out to the woman. She grabbed his right hand with both hands, screaming “Allah, Allah, Allahu Akbar” (God is great). The screams were heard clearly both at the venue and in the live TV broadcast because Erdogan still had the microphone in his left hand. The footage of the incident hit the Internet media with the tag, “The woman who recovered after holding Erdogan’s hand.”

Whether this incident is actually true or not, it has appeared in the Turkish media and only adds to Erdoğan’s popularity among the Islamist population.

The second article that has appeared shows a TV commercial for Erdoğan’s presidential campaign. You can access the commercial in the article, or here.  Erdoğan is seen as opening a new era for Turkey. Apparently Erdoğan himself is reciting an Islamist poem. And that is Erdoğan’s voice. 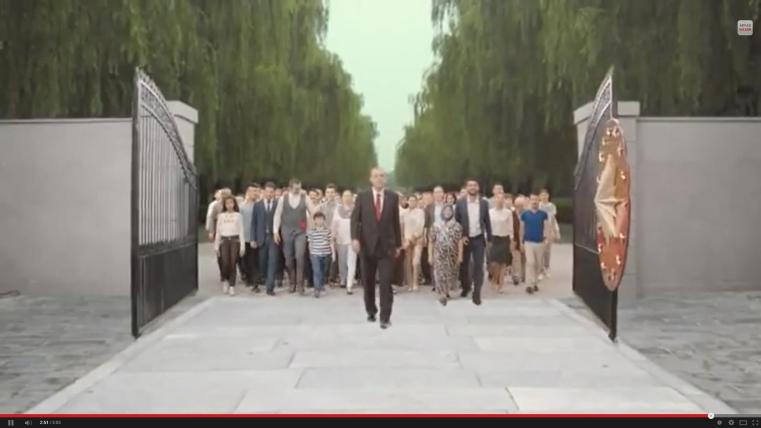 UPDATE, 10 August 2014: The commercial pictured above was banned by the Turkish court because it had religious imagery in a public commercial.  Its been removed from sites that originally played it.  However, you can see excerpts of it here, but I don’t know for how long.  Apparently the little gold stars held by the older people and handing them to the young people symbolized a call for Turkey to return to its Islamist roots.