“As I was thinking about this, suddenly a goat with a prominent horn between his eyes came from the west, crossing the whole earth without touching the ground.” (Daniel 8:5)

“I am going to tell you what will happen later in the time of wrath, because the vision concerns the appointed time of the end. … The shaggy goat is the king of Greece, and the large horn between his eyes is the first king.” (Daniel 8:19, 21, author emphasis)

As written in my book, Daniel Revisited, it is shown that Daniel 7 and 8 are to be fulfilled in the end times, not in ancient times. We can also see the convergence of events with Bible prophecy continually in the Middle East. In this earlier post I give reasons why newly-elected Turkish President and former Prime Minister Erdoğan may very well be the prominent horn of the Turkish goat.

Now we see another news story that suggests to us that single prominent horns do not share power. Erdoğan and his earlier ally Abdullah Gul co-founded the Islamist AKP Party in Turkey back in 2003. Many viewed Erdoğan and Gul as doing the same thing Putin and Medvedev in Russia are doing – exchanging who is prime minister and who is president so they can get around their country’s constitution and stay in power.

But now that Erdoğan is president, who cannot by the constitution support any party, he wants to become the sole leader of Turkey. Of the idea that Erdoğan and Gul may swap positions and share power, this article from Al-Monitor states,

“But for those who knew both men, and more importantly, had a sense of the inner mechanisms of the ruling Justice and Development Party (AKP), of which Gul and Erdogan are considered co-founders, the chances of such a swap looked nearly nil.

The reason was very simple: Erdogan was aiming for the presidency to further his Sultan-like hegemony on ruling the country, and such an endeavor would not permit any sort of power sharing with anyone.” 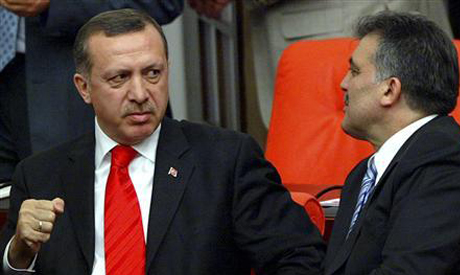 The prominent horn of the goat, having great power and being prominent would likely be popular and aggressive. Erdoğan is both. Now we see him fulfilling another role: after ten years of working closely with Gul, he is working to see that Gul and no others are to be horns on that goat and that Erdoğan is indeed the only one, the prominent one. And so we can add another attribute to Erdoğan that helps in converging on prophecy, and yet another reason Erdoğan is the goat’s prominent horn.