Home › In The News › A Prelude to the Second Signpost: “Red Line” Drawn by Second Horn

A Prelude to the Second Signpost: “Red Line” Drawn by Second Horn

This recent development in Iran has had prophetic circles buzzing in the last two days. Thanks go to one of our readers who alerted both Nelson and me about this story. The leadership within Iran’s IRGC (Iranian Revolutionary Guard Corps) has stated to ISIS that crossing Iran’s defined red line will result in Iran’s full participation in combating ISIS.

Those who know the Signposts realize this seems to be an important step toward the Second Signpost, the invasion of the Middle East by Iran. There is another layer of greater significance here though that should be told, which the article ironically has created in a detail which shoots itself in the foot. And so I needed do some homework before posting about this story.

The article says that “Brigadier General Mohammad Baqeri” (also spelled “Bagheri” for those who want to research about this) stated that, “Baghdad, the holy shrines and the shrines of Shiite imams are surely all among the Islamic Republic’s red lines.”

While the general public might think this is something significant, they might for the wrong reason. First of all, just because the media reports on something said by some official does not make the statement official Iranian policy. There are lesser officials or former officials such as Akbar Rafsanjani who is a former president of Iran and voice for greater freedom in Iran which is at odds with the supreme leader’s policies. Those like him who are at odds with the regime or are second-tier military officials such as Brigadier Generals, make statements in the media that can be considered no more than rhetoric. It might be interesting and that would be about it. 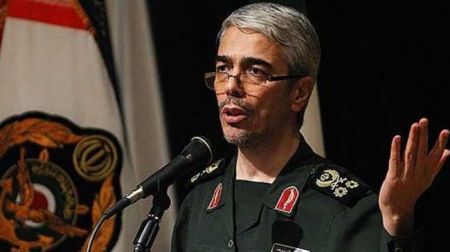 However, Mohammad Baqeri is not a Brigadier General – he is a Major General. Maj. Gen. Baqeri was the main man involved during the IRGC take-over of the intelligence offices of the country (see pp. 177-78 in this excerpt).

The Major General is the top command rank of the IRGC. Jafari, head of the IRGC, and Suleimani, head of the Quds Force within the IRGC, are Major Generals. A statement made by the supreme leader or by the top brass of the IRGC can be considered weighty, while one made by a Brigadier General or lower rank is more likely to be rhetoric.  One could exhaust himself going back over past years in the news in Iran reading statements that are all indeed, rhetoric.

The top group of commanders of the IRGC, called the “Command Network” (note Major General Bagheri on chart 6) consist of about a dozen or so commanders who are in solidarity both in ideology and as comrades having all fought in the Iran-Iraq War together as soldiers and junior officers. It is from this core that the second horn of the Persian ram is represented. I wrote about this in this post and in this excerpt from Daniel Revisited. The second horn is spoken of in Daniel where it says, “One of the horns was longer than the other but grew up later.” (Dan. 8:3b, NIV)

When a Major General – such as Jafari or Suleimani and yes, Baqeri – speaks it needs to be given weight as official Iranian foreign policy.

Back to the statement itself, I had speculated in this post that Iran was holding off from engaging ISIS directly, due to the IRGC needing more time to be ready for its war campaign, and that it probably would not engage unless Baghdad was threatened. And now the IRGC, the second horn, has officially stated so with this “red line” statement.  Speculation has become a policy.

Included in the article are some remarks from Iran expert Philip Smyth of the think-tank Washington Institute for Near East Policy. He speculates of course based on research, but astonishingly what he says is indeed fact in the realm of Signpost theory. (Maybe he should read my book.) Smyth said that Iranian participation, “would be an affront to the U.S.’ Sunni allies: Saudi Arabia, United Arab Emirates, Qatar and other Gulf Arab countries, who already are taking part in the U.S.-led anti-ISIS coalition in Syria.” These are the very nations that are at risk of being overrun in the Second Signpost. He also said, “When you start seeing Iranian aircraft, (Iranian Revolutionary Guard Corps) forces on the ground, Iranian advisers training the Iraqi military, it could easily devolve into a regional conflagration.” I agree completely. That “regional conflagration” would be the Second and Third Signposts. Smyth also noted there is no other force to quell this Iranian mobilization, which fully agrees with Daniel 8:4b speaking of the Persian ram, “No animal could stand against him, and none could rescue from his power. He did as he pleased and became great.”

The article ends with this statement, “There is concern that any direct Iranian intervention will lead to an all-out Shiite-Sunni war throughout the region.” This is obvious in light of Signpost theory.  When the persian ram runs out west to engage ISIS, it could just as easily run south and north at that time, just as Daniel 8:4a says.

So now that Iran has drawn the line and the ISIS with its caliphate-fed arrogance all but certain to cross that line at some point in the near future, indeed the Second Signpost is not very far away. I say this to new readers: this invasion by Iran is far more significant than mere chaos, national economies coming down, and World War III beginning across the Middle East – it is a sign, given clearly and concretely in God’s Word that Christ is indeed coming soon. Get ready.  I also say to long-time readers: spread the message to your pastors, brothers, and sisters for the sign that Christ is coming, will be here shortly.

Like Loading...
‹ The “Winds of Heaven” Connect the Horsemen to Daniel 7
A Prelude to the Second Signpost: Iran’s Call to Mobilize ›