Home › Signpost Theology › The Man Most Used by God to Seal Daniel?

The Man Most Used by God to Seal Daniel?

Meet Trajan, Emperor of Rome from AD 98 to AD 117.  That’s his marble bust below.  Known as one of the Five Good Emperors, historians even after nineteen centuries know him as the Roman emperor who ruled with public welfare programs, building programs, philanthropy, and military expansion of the Empire.  Every emperor that followed Trajan was honored by the Roman Senate with the wish: “be luckier than Augustus and better than Trajan.” 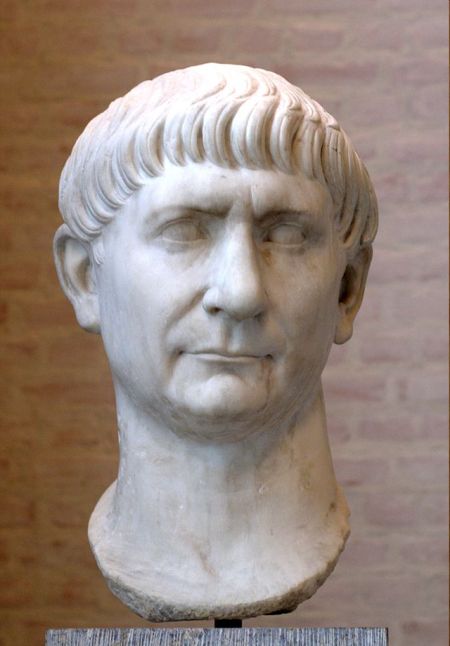 So why would this man be tied to the sealing of the book of Daniel which was written 650 years earlier?

“The vision of the evenings and mornings that has been given you is true, but seal up the vision, for it concerns the distant future.” (Daniel 8:26)

“But you, Daniel, close up and seal the words of the scroll until the time of the end. Many will go here and there to increase knowledge.” (Daniel 12:4)

God used many men and means to keep the meaning of the visions in Daniel 7, 8 and 11 sealed until the end time.  Contributing to this sealing has been a misunderstanding of a key passage in Daniel 2:40:

“Finally, there will be a fourth kingdom, strong as iron-for iron breaks and smashes everything-and as iron breaks things to pieces, so it will crush and break all the others.” (NIV, emphasis mine)

What does this verse really mean?  The fourth kingdom down from the top in the metal statue of Daniel 2 must smash, must break up, must pulverize, the empires above it – the Babylonian, Persian, and Greek Kingdoms, just as iron smashes gold, silver, and bronze.  Just about any Bible commentator’s writing on the topic will mention Rome’s conquest of these empires.

Of course just simply conquering an empire does not include breaking it up.  The word translated break in Daniel 2:40 is deqaq (Strong’s #1855) and it means to break up into little pieces – to pulverize.  What is missed in popular theology is the idea of pulverizing – breaking an empire into bits so that the empire in question is unrecognizable.  Islam, of course, did this to Babylon, Persia and Greece by changing these empires’ languages, religion and culture.

The Empire of Iron Legs is different from all the other empires in the statue in Daniel 2:40 because it acts on all the others to pulverize them.  Rome never pulverized any of these other kingdoms, but during medieval times, Islam did (see Chapter 1 of Daniel Revisited).

Theologians through the centuries believed that to crush the other empires, Rome would have had to at least conquer them.  That was good enough apparently.  The earliest theologians like Hippolytus and Jerome had never seen Islam and so had never seen what a realm like Islam would truly do to the other empires in the way of pulverizing – making the empires unrecognizable from the pre-conquered state.

So just the mere act of conquest was good enough to meet their definition of crush.  As far as I was able to find, Hippolytus, a bishop of Rome around 200 AD was the first to suppose that the iron legs of the statue in Daniel 2 was Rome.  What had happened prior to Hippolytus’ time to make him say it was Rome?

Three-and-a-half centuries prior, Rome conquered Greece (the bronze belly and thighs) in 146 BC.  Greece was later organized into a Roman Province in 27 BC.  That was easy.

But it was not until around 116 AD that Rome successfully conquered Babylon (the gold head), and a piece (not the entirety!) – only a piece – of Persia (the silver chest and arms).  Babylon and the Persian provinces were only held on to for a few months, but I suppose a conquest is a conquest in some people’s minds.  So who was the enabler for this military campaign allowing Rome to claim conquest of Babylon and a slice of Persia?  It was Emperor Trajan.

Trajan was 45 years old when he became emperor of Rome in 98 AD.  He spent the first decade of the second century expanding the Roman frontier along the Danube in what is now Romania.  Finally in 113 AD at the ripe age of 60 he embarked on a campaign to conquer Persia, fancying himself as the next Alexander the Great.  Of course Alexander really did conquer Persia – all of it – but Trajan only conquered the regions of Armenia and Mesopotamia as shown on the map.  To conquer Persia he would have had to go all the way to India.  As one can readily see, he got nowhere near India, despite the fact that adoring historians 200 years, like Eutropius, claimed that Trajan had indeed conquered Persia all the way to the Indian border.  Today we know this as a great exaggeration and is simply not true. 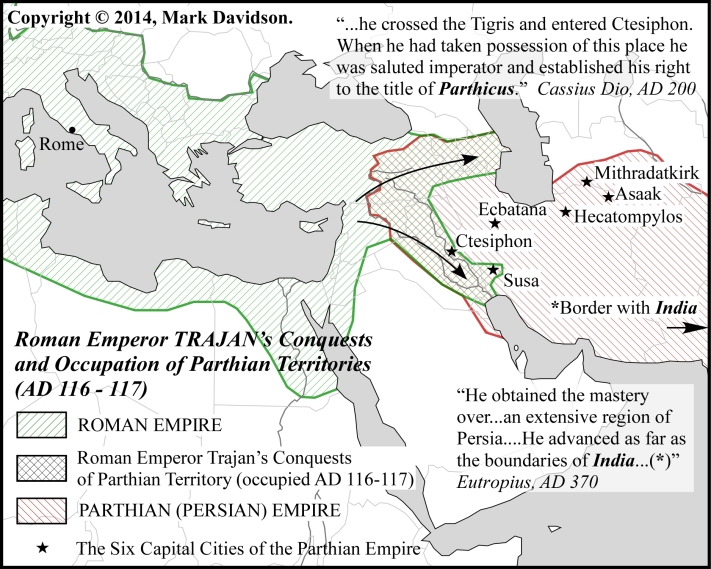 Four years into his campaign he died from a mysterious disease, at age 63.  His conquests for Rome were quickly relinquished.

The Senate back in Rome granted Trajan the title Parthicus – victor over Parthia (Persia).  You can see the emperor’s name TRAIAN and his title PARTHICO on the coin. 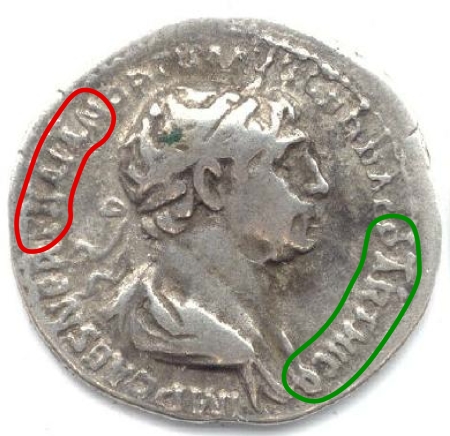 Back in those days one of the most effective newspapers and advertisers were the silver coins used to pay workers and placed in general circulation.  Seeing these coins everyday it would have been believed by the common man that Trajan, i.e. Rome, had indeed conquered Parthia.

So between exaggerating historians and coins in circulation it would have been “common” knowledge that Rome had conquered Persia.  Early theologians found a candidate after all – Rome – for the iron legs and it caught on1 until here we are today with a Church awash with the unchanged mythological idea that Rome conquered Persia and more than that had somehow crushed it.  (Ref. 1. Appendix A of Daniel Revisited)

Therefore, the two greatest factors that worked in league with one another, in my opinion, are that (1) no one really knew how to apply the word deqaq appearing in Daniel 2:40 to real world empires, and (2) ancient Roman historians many centuries ago exaggerated Trajan’s achievements in his battles with Persia.

However, as Daniel 12:4 says the scroll is to be sealed until the end.  Not thinking through and seeing real life examples of deqaq coupled by an emperor with an eagerness for military greatness both readily fed the habit of men to willingly shoehorn an interpretation into prophetic Scripture to fit their time because they think their own time is the end time.  But now we can look back over the centuries with the benefit of those who ran “here and there to increase knowledge” (Daniel 12:4b) of history of the Roman Empire and the Islamic Empire – those who travelled to archaeological dig sites to find out that the soldiers that destroyed Jerusalem were not Romans but Syrians, and to places within the Roman and Islamic Realms to find the answers that Muslim armies captured many lands and empires which allowed Muslim law and society to convert all people in those lands to Islam over centuries.

Deqaq was assigned an imperfect meaning to Rome in that Rome would simply conquer a land without any regard to the fact that that land’s language and culture would conquer the Roman Empire (I speak of the Greek Empire).  And that this imperfect assignment of deqaq was given Persia as a candidate due to the Roman Emperor known as Trajan.  If Trajan had never assaulted Persia as he did, perhaps theologians would never have been able to truly say that Rome crushed all the other empires, per Daniel 2:40.  They would have perhaps waited to find a candidate for the iron legs, and seeing Islam’s achievements might have assigned Islam to the iron legs in the time of the Renaissance.

But no, a man named Trajan became emperor of Rome and conquered two outlying provinces of Parthia.  He gave theologians a candidate for Daniel 2:40.  The rest is history.