Home › In The News › Will Egypt Be Compelled to Sit Out The Second Signpost?

Will Egypt Be Compelled to Sit Out The Second Signpost?

I watched the ram as he charged toward the west and the north and the south. No animal could stand against him, and none could rescue from his power. He did as he pleased and became great.

The Second Signpost says Iranian forces will run out to the west, as far as the Mediterranean Sea, and will be able to do all the regime desires. To the west of Iran, there are three nations’ militaries on the Mediterranean that might have the power to interfere. From north to south they are Turkey, Israel, and Egypt.

Israel may stay out of the war entirely if it sees Muslims attacking Muslims.

As far as Egypt is concerned, recent developments suggest Egypt might actually sit out the Second Signpost. How could this be?

To begin with, Egypt’s oil production has been steadily falling short against its own consumption, as the bar chart shows. Egypt needs to be an oil importer. However, Egypt is broke and in debt to just under $100 billion which is a lot for a country whose economy has tanked. 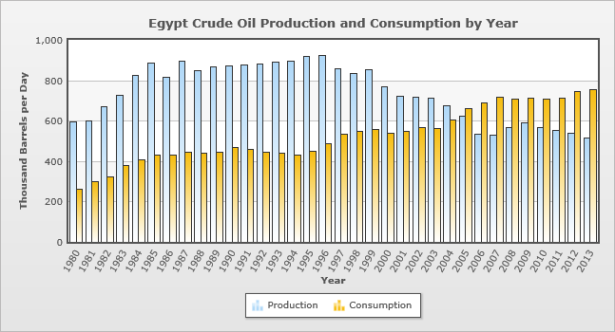 Trends in Egypt’s oil production and consumption show that Egypt will likely be producing only 60% of its needs by 2017. From eia.gov.

Recently, Egypt and Saudi Arabia have been trying to strike a deal for Egypt to get the gasoline and other oil products it needs. This NY Times article reports that the Saudis would provide oil and some investment in the Sinai in exchange for $22 billion and two islands of Egypt’s sovereign territory (see map below). The islands are situated in the Strait of Tiran, which joins the Gulf of Aqaba to the Red Sea. This strait is the only access path for Israeli ships between its southern port of Eilat and the Red Sea. 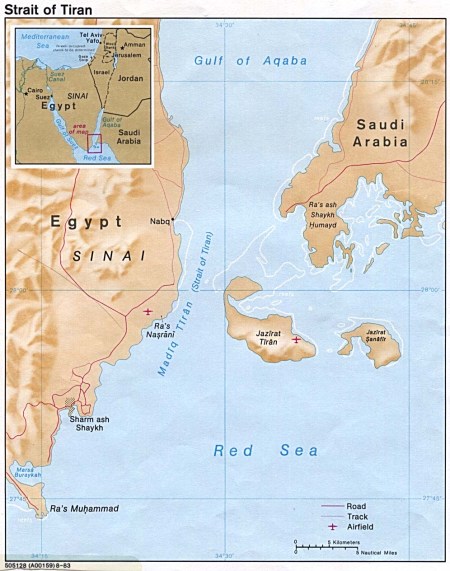 The two islands in question. The Egyptian mainland is toward the west, and Arabia is to the east. The inset shows that this involves Israel’s access to the Red Sea.

This news story says that the amount of oil products is going to be 700,000 tons of gasoline and other refined oil products per month. That is the equivalent of Egypt receiving 225,000 barrels of crude oil per day when all the math is done. Per the bar chart, 225,000 barrels per day would just about take care of Egypt’s needs.

Egypt’s high court, though, rejected Egypt’s giving away the two islands, and the Saudis have said “no islands, no deal.”

Iran might take advantage of this opportunity. Since Iran is now producing 4 million barrels per day, another 225,000 barrels does not seem like a big deal.

If Iran’s mullahs are shrewd, and Egypt is desperate enough, might Iran buy off Egypt’s opposition by providing 225,000 barrels per day at a reduced price – maybe even, for free? Such a deal in the future would go a long way to fulfill Daniel 8:4.  If Egypt is willing to give away two islands to an ally, might it accept free oil from a potential enemy?

We shouldn’t be too surprised at such an arrangement. During the Tribulation, might Antichrist buy Europe’s allegiance by providing all the oil it needs from the Middle East oil fields; the same oil that was cut off during the Second Signpost?

Like Loading...
‹ Will the Bible’s Number of Completion Apply to the USA and UK?
The Second Signpost: The Neocons Make A Move ›