Home › Europe in the End Times › Notre Dame, France, and the Great Falling Away

Notre Dame, France, and the Great Falling Away

On April 15 the Notre Dame Cathedral in Paris caught fire. The roof was destroyed with the spire, and much of the interior on the ground was destroyed. The stone exterior and the two bell towers in front survived intact. 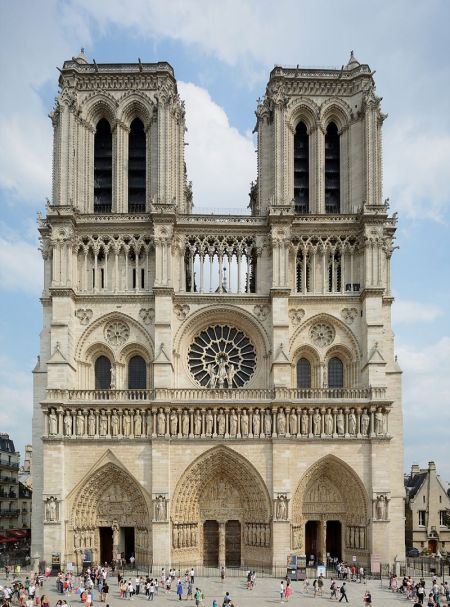 The bell towers at the front of Notre Dame are intact, as is much of the stone structure on the outside of the Cathedral.

Watching those huge flames and billowing smoke rising from Notre Dame Cathedral on TV News touched me inside. I was moved inside with sadness to a surprising degree. Why was this?

After some reflection I have arrived at the following.

The Notre Dame Cathedral is a physical monument to, and a symbol of, the traditional Christian, French culture of the last many centuries. To a lesser degree it reflects the traditional European Christian culture.

Located on the Ile de la Cite, a natural island in the Seine River, the Cathedral is located not only at the heart of Paris, but also at the geographical heart of the culture of France.

The roof and much of the interior of Notre Dame Cathedral was destroyed.

Chronologically, the Cathedral was built in the centuries at the time that Christianity was very much at the heart of French culture.

Clovis I, considered by many to be the first king of what would eventually be France, was baptized in AD 508. This led the Frankish population at that time to become Christian, and the new nation made Christianity its state religion.

In the middle of the twelve centuries (AD 1163-1260) between that time and the Enlightenment, Notre Dame Cathedral arose as the visible, physical edifice to French Christianity, in the very heart of the French nation and French culture.

Besides Cathedrals, Christian Europe produced some of the most beautiful works of man ever created in art, music, and architecture.

In the last two centuries, starting with the Enlightenment, the French people—as well as much of the rest of the people of Europe—cast off Christianity. In contrast the result was World War 1, World War 2, the Holocaust, and Soviet Communism.

The fire to me seemed to be a reminder that traditional Christian France has been neglected and forgotten, which to me is sad. The fire also made a change to the Cathedral that actually better reflects today the state of the French nation (and of most of Europe, too).

Viewed visibly on the outside, with Europe’s cities and architecture, everything now seems as it was.

However, the heart, the inside, is left desolate of both the Cathedral, and of European culture. The cross and statue of Jesus dead in Mary’s arms is still there miraculously. But there is desolation all around these objects. 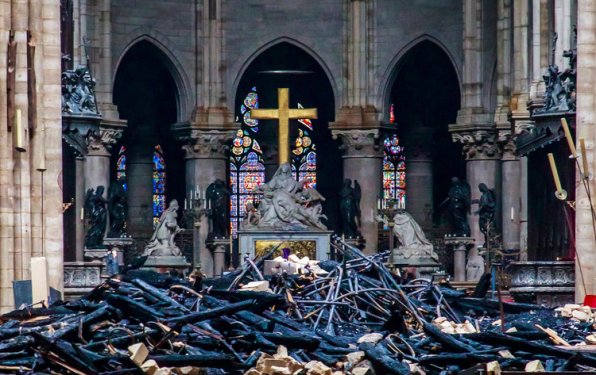 The cross and the statue of Jesus can be seen amidst the destruction and desolation.

It’s as if Jesus Christ, which was part of the inside of French culture, is still there, beckoning the people of France, and of Europe, to return to Him. French and European culture still has its appearances on the outside, but there is nothing on the inside but desolation, except Christ is still accessible to people if they would only seek Him.

I believe this is why I felt sadness seeing the Cathedral burn. The once great Europe, the largest bastion of Christianity on earth while Islam grew, and the East was Hindu and Buddhist; the great continent blessed by God and enabled to dominate most of the rest of the world and able to send droves of missionaries to points all over the world, has abandoned its faith, and is now a shell of what it was. How very sad.

For Europe, the great falling away written about by Paul started three centuries ago, and will finish during the Great Tribulation.

The tragic burning of Notre Dame is a reminder of the path Europe has chosen, which has now opened itself up to be dominated by the Antichrist’s realm in the years to come, prior to Christ’s return.

Like Loading...
‹ Iran’s Great Invasion – A Free PDF
Be Alert: We May Be At the Doorstep To the Second Signpost ›

Categories: Europe in the End Times, In The News