Home › In The News › More Attacks: Tipping Point Ahead

Just as it seemed we might have a quiet week relatively speaking these days (except for the single rocket hitting the Saudi airport in Abha), two more oil tankers were attacked today, June 13.

Both tankers—one Norwegian, the other Japanese—were on fire and their crews have been rescued. The tankers were allowed to drift in the Gulf of Oman. 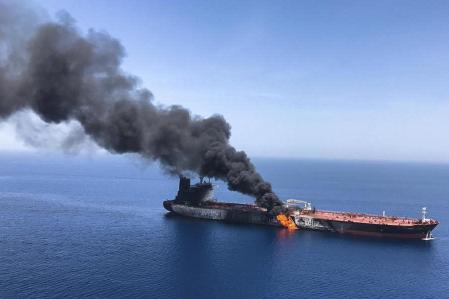 One of the two oil tankers attacked in the Gulf of Oman on June 13, 2019. After an explosion, the tanker caught fire.

It is not known at this time who exactly is responsible or what weapon was used in the attacks.

Whether this was an attack by the IRGC or the IRGC-backed Houthi, is not known at this time. It might even be, heaven forbid, warmongers in the West wanting to start a fight (i.e., false flags).

Where might the tipping point be before full war is waged between Iran and the USA? We don’t know for sure, but one thing is probable: if these attacks keep occurring on a fairly regular basis, war cannot be that far away.

Watch. Be ready. It looks like the Second Signpost draws near.

Like Loading...
‹ The Union as a Tool in God’s Hand, Via Abraham Lincoln
“Iran’s Great Invasion” now in French ›