There is NOTHING to Stop Iran From Starting the Second Signpost

Evidence is mounting that the flight and weapon systems involved in the September 14 attack on Saudi Arabia’s largest oil processing facility were Iranian in origin as well as from the general direction of Iran or southern Iraq. 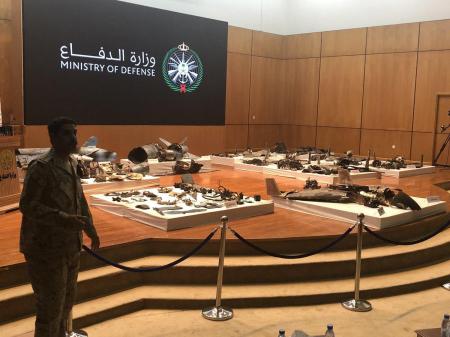 Evidence by the Saudis of Iranian hardware involved in the attack on their oil facility September 14, 2019.

If this is all true, and the IRGC is ultimately responsible for taking out 5 or 6 percent of the world’s oil production, what is to stop it from taking out all the remaining oil facilities in the Middle East in order to bring the total to 25 percent taken out?

Unlike ballistic missiles which can be defended against and shot down, there is no automated system that can protect against a cloud of drones. The defense system to protect against such an attack has not been developed and fielded yet. Defense would require soldiers with anti-aircraft guns and anti-aircraft missiles surrounding every oil processing facility.

The world seems to be sleeping, just as the church as the ten virgins are still snoozing away. What makes people think Iran won’t just take out the oil facilities in (see map) (1) northern Iraq, (2) southern Iraq, (3) Kuwait, (4) eastern Saudi Arabia, (5) Qatar, and (6) the UAE? Once that happens, the Second Signpost officially begins with the Iranian boots on the ground moving out while the world stares in horror at the loss of one-quarter of all its oil. 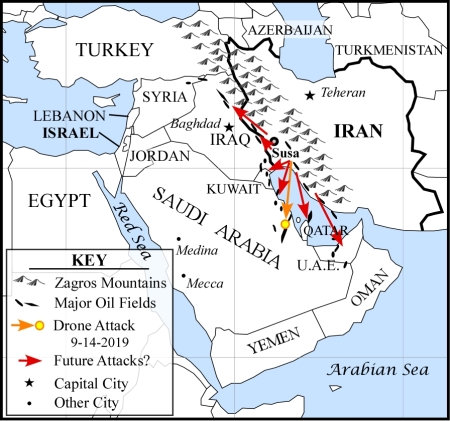 Map showing locations of oil fields in the Middle East relative to southwest Iran where Saturday’s attack is believed to have originated. Note how all oil fields are in an arc surrounding southwest Iran.

To western minds is Iran just reacting to sanctions without an overarching strategy of Shia domination of Muslim nations in the Middle East and economic chaos across much of the world? Do people really think Iran will stop with the one facility?

To those who know the Signposts, it is definitely in Iran’s plans to do these things, to occupy, to remove oil production. So what is to stop Iran from finishing the job and taking out 25 percent of the oil flow of the world?

Nothing; except God’s grace giving us a little more time.

The silence is deafening.

Like Loading...
‹ Drone Warfare Revealed As an Instant Enabler for the Persian Ram
The Slumber Goes On and On and . . . ›