The Depth of the Five Scripture Passages of the Second Signpost

While we are waiting for the next significant news item from Iran and the Middle East, it seemed good to have a review of the Scripture passages all having a say in the Second Signpost. This is meant to remind us that the Second Signpost, the invasion by Iran of the Middle East, is more than just an advancement of military force to be viewed by prophecy students in a far off land from Iran.

Some people concentrate mostly on Daniel 8 and so miss the wider picture I believe the other Bible passages are telling us about the Second Signpost. Granted, Daniel 8 is a good place to start for sharing the idea there will even be an invasion by Iran, but there is more to the story.

The Bible gives us a deeper view when all passages are considered.

The Passages of the Second Signpost

Daniel Revisited offered three Scripture passages to tell us about the Second Signpost. They are Daniel 7:5, Daniel 8:3–4, 20, and Revelation 6:3–4, 8. All three passages are telling us of the same major event, from three perspectives.

Research for my last book Chronicles of the End Times yielded two additional passages. They are Matthew 24:6–7, and Revelation 14:15–16. They also tell of the Second Signpost from two additional perspectives. Matthew 24 is basically a commentary of the end times given to us directly by Christ. Revelation 14 is a picture of what will go on behind the scenes in the heavenly realm, in which seven angels each perform some deed for each of the seven events of the end time.

These five passages—all of Matthew 24, Revelation 14, Daniel 7 and 8, and Revelation 6—tell us not only the Signposts, but they tell us all the events that will be part of the end times.

What is more, the texts of all five passages yield a total of eight chiasmi that wonderfully echo across all these passages. (A chiasmus [plural chiasmi] is a text that has a literary form which yields more information to the reader, manifested by many words and phrases echoing one another and converging to a center, or are arranged in parallel. Highly recommended to introduce the reader to the chiasmus, is a free pdf of Chronicles, chapters 3 to 5, which teaches about chiasmi.) Wonderfully, these five passages each have words and phrases that echo the same words and phrases in one another. There are a total of seven major events in the end times, and there is one chiasmus for each event (with the exception of the Fifth Event which has two chiasmi). The seven events are the four Signposts, the Great Tribulation (Satan’s Wrath and God’s Wrath), the return of Christ, and the turning over of the kingdoms to the saints.

A Chiasmus of the Second Signpost Across the Five Passages

Figure 143 from Chronicles presents this “inter-book” chiasmus across the five passages, for those text portions of the passages pertaining to the Second Signpost. The echoed words and phrases in this chiasmus are evidence these passages are talking about the same event. The chiasmus also teaches us some additional things. 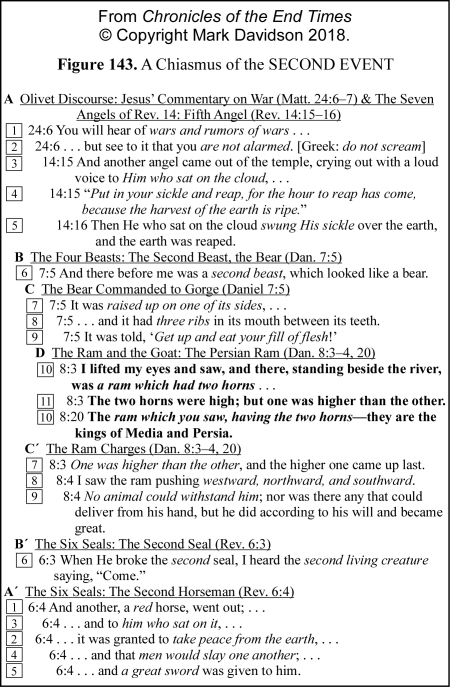 Note Matthew 24:6 and Revelation 14:15–16 echo Revelation 6:4. The words echoing in these passages are contained in the outside panels labeled A and Aʹ. “Aʹ” is pronounced “A-prime.” These passages and words speak of the theme of the Second Signpost, which is war, and the general condition of things at that time, which is peace taken from the earth and people wanting to scream. Men will be slaying each other on a massive scale because of the power given the second horseman; holding his great sword echoes the angel wielding his sickle harvesting the earth. This confirms the killing will be on a large scale during the Second Signpost.

Through four of the events of Revelation 14, there is a pattern of pausing and reaping twice, pointing to the First and Third Signposts being a pause in the great killing, and the Second and Fourth Signposts being the time of great killing. During all the years of the First Signpost (1980-2020), between one and two million people were killed. Tragically this is a clue as to the number of casualties to be expected during the Second Signpost. It will be a savage time in the Middle East.

Next inward are the B and Bʹ panels confirming this event is second, both from the bear and the second seal. Daniel 7:5 echoes Revelation 6:3.

Moving on toward the center are the C and Cʹ panels. They show that Daniel 7:5 echoes Daniel 8:3–4. The bear and ram echo and are both higher on one side. Three ribs resonate with the three directions. And lastly, “no animal could withstand him” echoes the bear’s assault and great feast. The parallelism in the texts of these verses show Daniel 7:5 and Daniel 8:3–4 are indeed speaking of the same event.

In the middle of the chiasmus we see the D panel. This is the central action and thought for the entire chiasmus, i.e. for the Second Signpost. In the center we see Daniel 8: 3–4 and 20. The entire event of the Second Signpost revolves around the two horns—the two powers—controlled by the kings of Media and Persia who are the supreme leader and the IRGC.

Common Properties of the Eight Chiasmi

Mentioned earlier in this article were eight chiasmi—one for each of the seven events of the end times (except two for the Fifth Event). There are common properties shared among all eight chiasmi:

1) The text of the chiasmus within each panel is written in the order the text occurs in the Bible. In the Second Signpost chiasmus there is a single exception with the switch of the second and third markers in the Aʹ panel.

2) All five passages are in the same order, top to bottom, and outside edges to center, from chiasmus to chiasmus.

3) Note the markers (words/phrases numbered in a box) in the top half of the chiasmus echo with the parallel pattern in the bottom half (i.e., the markers indent further from left to right as the lines go down on the page), except for the center panel D, where they converge on a center. The second event (Second Signpost) shown in this article, and the fourth event (Fourth Signpost), with the sixth event (return of Christ), all form a parallel echoing of words. In contrast, the first (First Signpost), third (Third Signpost), fifth (Great Tribulation), and seventh (saints rule) events, all have a convergent word flow, pointing to the center of each of the odd-numbered chiasmi. This may not mean anything in itself except it is direct evidence a great Intellect put the text together to form this alternating pattern.

If this article got a little too deep as a study, I apologize. My aim here is to show that there are five confirmed Bible passages telling us about the Signposts, and here we specifically saw the Second Signpost. This chiasmus shows the five Scripture passages fit like pieces of a puzzle into a bigger picture to form the Second Signpost.

As said at the start of this article, some people concentrate mostly on Daniel 8 and so miss the wider picture I believe the other Bible passages are telling us about the Second Signpost. Granted, Daniel 8 is a good place to start, but there is more to the story. In addition to Iran merely moving out in three directions (Dan. 8:4), we are also shown nations will be ravaged (Dan. 7:5), there will be mass slayings (Rev. 6:4, 8; 14:15), and peace of mind will be removed from the earth making us all want to scream (Rev. 6:4, Matt. 24:6).

Figure 143 from Chronicles can be downloaded and employed to remind us of the richness of Scripture rounding out the Second Signpost.

As we watch the Second Signpost unfold, we can then confirm how many of these five passages are being fulfilled so we will more readily consult these passages for the remaining Signposts and other end-time events.

Like Loading...
‹ Now In A Time of Grace, Waiting for the Moment of Truth
US General Addresses His Troops Ahead of the Second Signpost ›