It is amazing to me that news stories reporting on Iran continue to show it going down the path of getting ready for the great Second Signpost invasion of the Middle East.  Without knowing about the Signposts of Daniel and Revelation as written about in Daniel Revisited, one can only guess what Iran might do.  But by knowing the Second Signpost we can see that all these news stories are indeed showing us Iran’s coming invasion of the Middle East.

This news story reports that Iran was to begin its largest navy exercise in the history of the Islamic Republic.  The exercise will extend from the Strait of Hormuz south into the Indian Ocean and west to the Gulf of Aden.  This area of ocean is roughly the size of Saudi Arabia.  The potential areas where the exercises will take place are shown on the map, just off the coast of the Arabian Peninsula which could see Iran’s occupation during the Second Signpost.  (Note: The red arrows represent the directions the Persian ram would run out from Susa, in Daniel 8.) 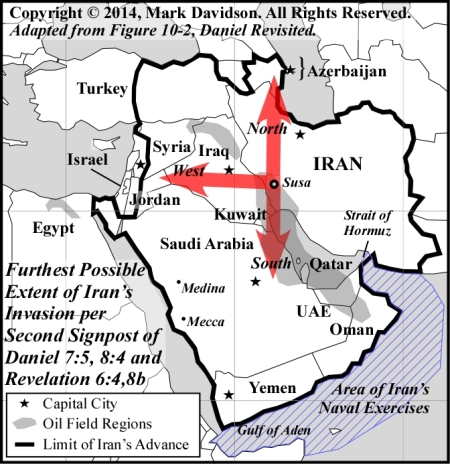 The ocean area Iran will conduct naval exercises, compared to the potential land area to be occupied by Iran during the Second Signpost

I see this naval exercise as prophetically significant in two ways.  First, this is most likely the greatest show of naval force in the Indian Ocean and along the coast around the Arabian Peninsula, by a Muslim power, since the Ottoman Empire’s navy last sailed those waters in the 1700s.  The Ottomans patrolled the Indian Ocean for 250 years until the Portuguese navy and then the British navy challenged them.

This is yet another data point that shows the Islamic Realm as a whole is rising as a significant power in the bigger picture.  Note that this exercise is not to be done in the Persian Gulf as Iran has conducted many past exercises, but it is to take place further out in the ocean, projecting power further from Iran’s borders. 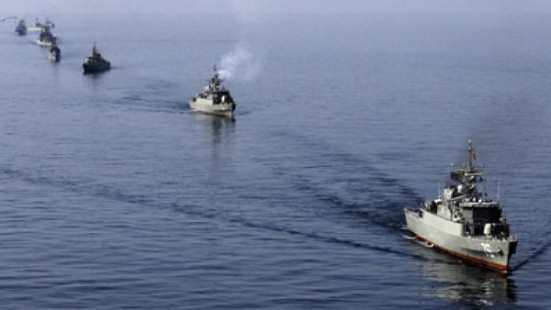 Secondly, and more ominously I believe, the Iranian navy is testing its naval support for its invasion during the Second Signpost.  When the Persian Ram runs to the south, we do not know how far it will run, but the limit is the Arabian Peninsula itself.  If Iran does manage to reach the southern coasts it will need support from naval forces patrolling the coasts.  Again, looking at the map one can see that the areas to be patrolled roughly correspond to the southernmost reach of Iran during the Second Signpost.  This additional story mentions that the Iranian navy might also be supporting the Shia Muslim Houthis who took over Yemen recently.  It is possible that Yemen could ally with Iran in controlling the southern Arabian Peninsula during the Second Signpost.

At the very least, the location of this naval exercise shows Iran has its eyes set on the southern coast of the Arabian Peninsula, for whatever reason: Yemen and the Second Signpost included.