Erdoğan to Continue Path Towards King of Yavan

The coup attempt in Turkey that occurred July 15 has been defeated.  Two stories – one from the Telegraph and one from Reuters – do a fairly good job of summarizing the events. 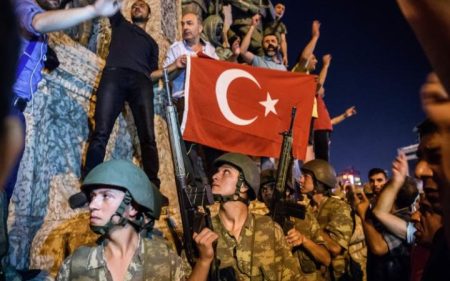 The stories say that it was elements of the military loyal to Erdoğan, and protestors rallied from the half of Turkey’s population that support Erdoğan, that apparently made the difference.

The suspected opportunity for Erdoğan to consolidate power is being used.  The Reuters story said,

“This uprising is a gift from God to us because this will be a reason to cleanse our army.”

“In the first signs of a crackdown, on Saturday morning the government announced 2,700 judges were suspended from duty.”

What all this means is that President Erdoğan’s rule continues and in addition he has an excuse to mold the army and the judiciary more into his image.  Its looking more and more like the goat’s first prominent horn, the king of Yavan (in Dan. 8:21), will indeed be quite the “king” before the Third Signpost begins.