Home › In The News › The King of Yavan Has Arrived

The King of Yavan Has Arrived

No, the Third Signpost has not started yet. Neither has the Second.

But if we are interpreting Scripture correctly, in which the First Signpost has occurred and signs are going on month by month that Iran is getting ready for its invasion of the Middle East, I believe the King of Yavan is now ready to be the prominent horn of the goat when the moment arrives.

I first suggested Erdoğan as the best candidate to be the goat’s first and prominent horn back in 2013. What a difference five years can make. He was charismatic and popular, but only the prime minister of a parliamentary system back then.

The election results are now in. Turkish president Erdoğan has won the election in the first round. According to the BBC, Erdoğan won 53% of the vote, with 99% counted, and 87% turnout. The second place candidate is Muharram Ince at only 31%. The remaining four candidates all came in with single digit returns.

Is this election fraudulent? Not likely. Earlier polls showed Erdoğan at around 50% (unless the polls were fraudulent) and roughly half the country being Islamists, love him anyway.

Turkish president Erdoğan, the king of Yavan, after winning the election. He is now the most powerful Turkish leader since the Ottoman emperors.

Those new powers are enumerated in Turkey’s revised constitution, posted here. Also in that post I noted that if Erdoğan wins the election to assume these new constitutional powers, he will be ready to be the horn on the goat. And so here he is. He will now be in a position of power to make war against the future invading Iranian militias. He has the power to make an alliance and even a new confederacy with like-minded Sunni governments in the area. He has the power to call any state of emergency. He is poised to become the ruler of a new vast Sunni nation stretching across the Middle East. 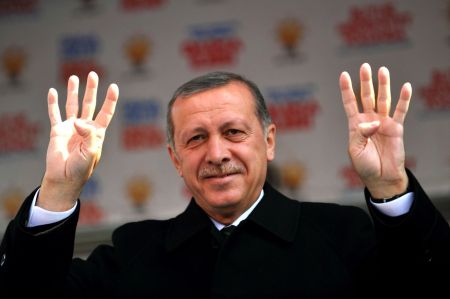 The King of Yavan all ready to now lead his four-nation confederacy. The story of the “four” sign is here.

In other words, if the Second Signpost started today, there would be nothing to stop Erdoğan from appearing as the prominent horn on the goat, ready to charge against the ram (per Dan. 8:5).

Unless God has other plans and wants someone else to be that horn, the King of Yavan, if it is indeed Erdoğan, has now arrived.

Tags: Erdogan, horn of the goat, king of Yavan, Turkey