“Iranium” and the Second Signpost

I had heard of the name Iranium in times past, but did not know what it was.  But that changed this past week.  After writing this earlier post about the article on the Clarion Project website, and how we should not be led astray by seeming possibilities of the Shia Iranians and the Sunni Turks being friends, I stumbled across Clarion’s webpage for Iranium.  Iranium is a 2011 documentary that shows by demonstration and testimony that the Second Signpost could very well happen.

I recommend that everyone see Iranium.  Here is a link to the movie’s website.  You can either order a DVD of it or see it on that website.  It is about an hour long.  Iranium covers Iran’s recent history since the 1970’s, its government, its leaders’ beliefs, and Iran’s nuclear program.  The movie suggests Iran’s intentions for the Middle East – which are to militarily dominate the Middle East and spread its Islamic Revolution throughout the countries there. 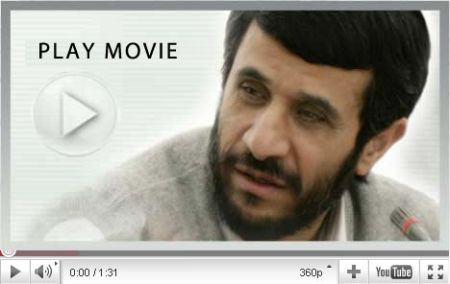 Not only does Iranium support the idea of the Second Signpost, but I find it surprising that one institution could support the making of a movie like Iranium, and then post an article on their website about the Turks and Iranians forming a new alliance.  The two ideas are at odds with each other.

I have assembled some of the major highlights of the movie which relate to the Second Signpost.  At 09:50 (and 22:00) Iranian government leaders are shown saying that the Iranian Revolution cannot be limited to Iran nor to Muslim countries.  It would first spread to other Muslim countries and then after that, to the rest of the world.  To me that sounds like the Second Signpost and then later on the Tribulation itself where the Antichrist attempts to spread his religion to the world.

At 18:30 it is stated that the Iranian Revolutionary Guard Corps (IRGC) and its Basij paramilitary force are the power behind the supreme leader.  As I show in Chapter 10 of my new book, and state in this post, it is the IRGC, not Ahmadinejad that is the second horn of the ram.  The Persian ram of Daniel 8:3-4 will have two leaders – ruling side-by-side – when the ram charges out.  The IRGC and the supreme leader need each other and are in fact co-rulers.  The supreme leader needs the IRGC to physically stay in power.  The IRGC needs the supreme leader to make their power legitimate. i.e. that they are supporting a representative of God and that it isn’t a simple military dictatorship.

At 19:20 it is said that the IRGC started with little power, i.e. the second horn started small, but it grew.  The IRGC has grown in power and reach within Iran in almost every area of life.  At 20:20-30 former U.S. Treasury Secretary Paulson is seen saying that if you do business with Iran you most likely do business with the IRGC.  From research I have done, the IRGC controls 40-50% of the Iranian economy.

Iran’s invasion of the Middle East will be relatively easy for Iran since it already controls Iraq, and will most likely have a pass through the country.  At 20:04 the movie stated that Iran does indeed control Iraq – the Quds force arm of the IRGC controls policy for Iraq.

Revelation 6:4 says that it is the second horseman who takes peace (peace of mind and security) from the earth.  I have written in past posts such as this one that Iranian control of the Gulf oilfields which supplies one-fourth of the world’s oil will cause the loss of peace.  In Iranium at about 30:45, one of the experts interviewed states that with Iran having nuclear weapons, Iran could easily dictate what happens to that oil.  Iran could blackmail the disposition of the oilfields when it finally attains nuclear weapons.  I agree that Iran having nukes will most likely be effective because world powers will know the mentality of Iran’s leaders.  As another expert says at 43:50, Mutually Assured Destruction (MAD) is not a repellant to using nukes as it was between the USA and USSR during the Cold War; it will be an inducement for Iran.

The movie finishes up where one of the people interviewed says at 54:43 that Iran must be stopped and that failure is not an option.  But as the world will soon find out, “failure” is very much an option.  Daniel 8:4 says the Persian ram will indeed run out, conquer, and do everything it wants to do.  At 55:10 it is said that humanity will pay a very high price if we do not do something.  This is certainly correct, for the price humanity will pay is that the Second, Third and Fourth Signposts with the inevitable seven-year Tribulation that follows will be the price that humanity pays.  The Bible says so.

At 55:20 it is said in Iranium that the situation is indeed grave – it is just that people do not know how truly grave it will be.  Where many may think we may have a nuclear war in the Middle East, it is actually far worse – the Antichrist himself will arrive on the scene.  Yes, now is the time for action.  But it won’t come, and if it does it will be too little, too late.  Again Daniel 8:4 tells us so.

Like Loading...
‹ The Signpost Perspective: Don’t Be Deceived by Seeming Shifts in Alliances
In the News: Al-Qaida Takes Over Anbar Province ›